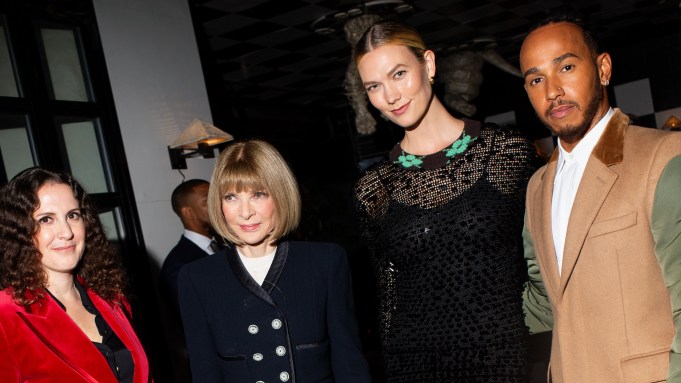 NEW YORK — Anyone walking past Shun Lee West Café near Central Park Wednesday night would have spotted a few familiar media and fashion faces sipping gin martinis on the sidewalk while awaiting their COVID-19 test results to be able to enter a W Magazine party. That list included Proenza Schouler designers Jack McCollough and Lazaro Hernandez, WSJ. editor in chief Kristina O’Neill, Bustle Digital Group founder Bryan Goldberg and makeup artist Gucci Westman. Among those who had been tested in advance and didn’t have to hang on the sidewalk were Vogue editor in chief Anna Wintour (a close friend of W editor in chief Sara Moonves’ father Les) and Formula 1 driver Lewis Hamilton.

Once test results were secured and all guests were inside, they toasted W’s third annual Originals issue featuring Dolly Parton — a shoot masterminded by W’s editor at large Lynn Hirschberg that had been in the works for no less than four years. “We were so excited to finally get her,” Moonves told WWD. “She was so much fun. The whole issue was really about people game changing.”

But apart from securing the Parton cover and the fact that this was W’s first party since the pandemic began, there was another reason for the jovial mood. During the pandemic, W’s future was in doubt, with its previous owner Future Media stating that the bottom had fallen out of the luxury market as advertisers pulled the plug on many print contracts. Since then, a lot has changed, with a number of celebrity backers — including models Karlie Kloss and Kaia Gerber and Hamilton — coming to its rescue financially to form W Media in partnership with BDG, the publisher of Nylon, Bustle, Mic and Gawker. As part of the deal, BDG manages the newly named W Media’s sales, business and technology, with Goldberg serving as managing partner.

“Karlie was the first person to sort of believe in this venture and Lewis was the second. They have been incredible supporters. We’re all on the board together,” continued Moonves, adding that they had their first in-person board meeting this week, just days after she and Kloss were in Austin, Texas, cheering on Hamilton at the F1 US Grand Prix.

“I met Lewis through this. I got to know him this year and I actually went to watch his race in Austin on Sunday, which was amazing. It was incredible watching him do what he does and he was really inspiring.”

As for her role at W, Kloss explained that Moonves is the “visionary leader” and she supports her in any way she can. “Today we had a board meeting and it was really exciting to see kind of over the past 14 months how Sara has been able to reimagine the brand in such a crazy time in the industry.”

“It’s so crazy to think Sara is the first female editor in chief of W in its 50-year history. [The magazine was founded by WWD’s legendary editorial director John B. Fairchild.] She’s such a force to be reckoned with and I thought it was only appropriate to have other incredible women around the table,” added Kloss.