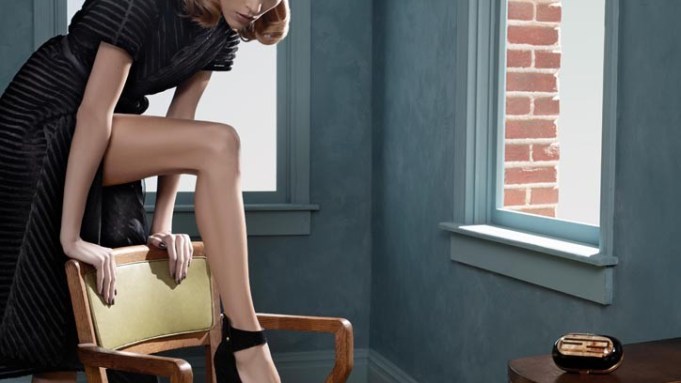 ROOM WITH A CLUE: Extending his range as a photographer and budding filmmaker, Karl Lagerfeld created a new campaign for Fendi that resembles stills from a movie — and a dramatic one at that. The ads, slated to break in August magazines, depict an “Italian couple in downtown New York,” according to Lagerfeld, who cast Polish beauty Anja Rubik and French model Baptiste Giabiconi as his protagonists. The mood is tense and enigmatic as the couple lounges around a retro apartment — actually, a set built by Stefan Beckman and suggestive of a hideout. Fendi said the campaign also would launch on its Web site and Facebook page.

MAYBE THIS TIME: In a bit of curious timing, Hachette Filipacchi Media U.S. chief executive officer Alain Lemarchand was spotted at the Time & Life building on Thursday. This sighting comes amid growing whispers that Lagardère, the French parent of Hachette (which publishes Elle and Elle Decor), and Hearst Magazines at last have agreed to some kind of joint publishing deal. It’s been reported that Hachette plans to move operations from 1633 Broadway to Lehman Brothers’ old offices in the Time & Life building this year, while rumors that Hearst and Lagardère were in talks first surfaced in The New York Post. Sources familiar with the possible arrangement said an announcement could come as early as today and believe a deal would be structured similarly to the ones Hearst has in the U.S. with Marie Claire; O, The Oprah Magazine, and Food Network Magazine. Insiders claim S.I. Newhouse Jr., owner of Condé Nast, also expressed interest in Elle, but he was apparently late to the party since Lagardère was already in negotiations with Hearst for a stake in the Hachette business. Spokespeople for Hearst and Hachette wouldn’t comment on “rumors.” A Condé Nast spokeswoman had no comment Thursday.

Meanwhile, Lemarchand’s presence in the Time & Life building led some to wonder if the deal with Hearst was done and dusted after all. Then again, if it is, perhaps Lemarchand was looking to get out of the lease, or for a new job?

THE GROUP RULES: Private sale companies are rapidly moving into the territory of another group of e-commerce rivals, the group buying sites, such as Groupon and its many imitators. The latest to add group buying is Ideeli, which today will offer spa treatments at up to two-thirds off — if at least 100 people buy. If not, the deal is off.

“It can certainly help grow our business. It’s offering another stream of revenue,” said Ideeli executive director of brand marketing Tamara Rosenthal. But it’s also valuable for retailers, she continued. “It answers a fundamental challenge retailers have been having, which is, How do you get customers in the door? Once they’re there, you can up-sell them. It’s a great value to the consumer, but the retailer is not losing money,” she said.

Typically, group buys focus on services, experiences and vouchers rather than physical goods, since they cannot be returned and don’t have sizing, color and fit issues. Ideeli plans to offer spa, travel, coupons for apparel and home goods, entertainment and experiences, said Rosenthal. It will offer deals in cities in which its chains operate. Spa Chakra, for example, has five U.S. locations.

Ideeli plans to roll out a mobile application at the end of the year, and is mulling social marketing with mobile social networks such as Gowalla and Foursquare. It also plans to expand into private sales for travel and men’s very soon, she added.