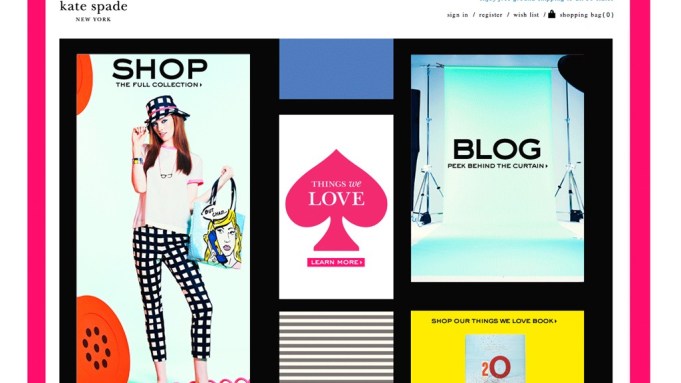 But behind the whimsical brand’s digital success is a highly choreographed operation. From social media across platforms like Facebook, Twitter, Pinterest and Instagram to a digital flagship that contains elaborate content, paired with a comprehensive e-commerce experience, Kate Spade has invested a lot of time in maximizing the brand experience for consumers.

All of the company’s Web sites — Kate Spade New York, Jack Spade and Kate Spade Saturday — will see a complete overhaul come spring, according to Johanna Murphy, vice president of e-commerce. Murphy oversees all the Web sites, direct consumer marketing channels like e-mail and search, mobile and “anything you can track an ROI on,” she said. The upcoming redesigns were a collaborative effort with the creative side.

She cites Amazon.com and Nordstrom as entities that have raised the bar for the brand online, especially in terms of what customers expect. This is why, in addition to how the site looks, careful attention is paid to fulfilment at katespade.com. Murphy has witnessed an uptick in an increasingly digital customer with higher expectations, and to cater to this individual, e-commerce sites will also see a relaunch later this year, as well as an enhanced inventory management system.

“We wanted to better understand the usability of the site. It really is an art and a science. Both Web site and e-mails are a great example of this,” Murphy said, adding that sometimes it comes down to words versus statistics. “We know what will make people react, and we spend a lot of time evaluating the performance of e-mail and creative and just what things work.”

An example of when science needs to win: e-mail subject lines.

Murphy explained that subject lines must be creative and compelling, and a lot of time is spent analyzing what creative works best. As for how creative fits into e-mail marketing, her team now knows what resonates best with the audience, whether it’s a graphic image or a photograph of a product.

Kyle Andrew, senior vice president of marketing, notes that although she’s more on the art side of things, while Murphy is more on the science behind everything, the two teams must work together closely to achieve digital success.

Andrew said that although Kate Spade, one of the earlier fashion brands to become active in the digital space, joined Facebook in 2008, it wasn’t until a bit later that the platform really became an important channel for the company. Five years later, Andrew counts Facebook as the brand’s biggest channel, with close to 700,000 fans.

Murphy noted that Facebook also functions as a customer service channel and an outlet for direct feedback. Customer service representatives check the page regularly to make sure consumer issues are being addressed — whether it’s a question about a product or an order.

Twitter is the second-largest social platform for the company in terms of actual size. Andrew said this is where the brand shares a behind-the-scenes view of the KSNY girl’s lifestyle. Instagram and Tumblr are also an integral part of Kate Spade’s digital presence, as are YouTube and Pinterest.

“We inherited a brand that had a voice from Kate and Andy [Spade], so it’s very easy, organic and natural to be on social media — and that’s why I think we were there before others. Our brand spoke. Most fashion brands don’t speak,” Andrew said, attributing success in this area largely to the fact that the brand didn’t have to make up a persona.

Mobile continues to remain a priority — and mobile and tablet behavior are tracked separately, according to Murphy. She said the company has a good idea of how customers use the devices differently — but driving sales is not really the primary focus with mobile.

“If you think about the way people use devices, it changes the business of retail. Our strategy is about that. It’s not necessarily about transactions, it’s trying to bring our world into their device in a way that makes sense,” Murphy said.

She stressed that the goal is for mobile to mirror the in-store experience. Features such as added product ratings and reviews are available so shoppers can look up such information while they are in the store.

But Murphy and Andrew agree that the biggest digital initiative will be the arrival of Kate Spade Saturday, the company’s new multicategory brand. It will launch in Japan this month and in the U.S. via Saturday.com this spring. Aimed at a younger consumer than the main Kate Spade line, a physical Saturday store will come later.

Features like live chat will be implemented to make customer service easily accessible.

“It is a pure play to begin with — [so] we need rich and robust product photography and we’ve invested heavily in that,” Murphy said. “The team has done a good job integrating social content around the product, and then there are a lot of ways for customers to reach out to us and get help about size or fit or any product details.”