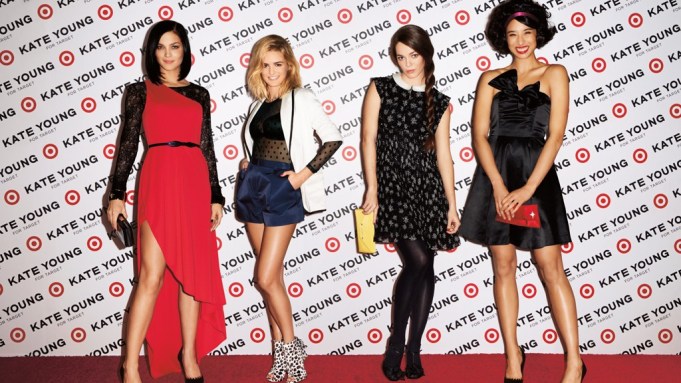 KATE’S TASTES: It’s clear from the advertising campaign for the Kate Young for Target limited-time collection that Kate Young isn’t a one-note Nancy. The stylist tries to find the quirky details that make a look one’s own. Young’s line of formal and semiformal wear will bow at most Target stores and target.com on April 14, following Prabal Gurung’s collection, which launched on Feb. 10. This is the first time Target has worked on a limited-time collection with a stylist.

“We always wanted to do a line of semiformal and special occasion dresses,” said Trish Adams, senior vice president of apparel and accessories at Target, when the partnership was unveiled in January. “Here’s someone that creates jaw-dropping moments.” For the ad campaign, Young and Target chose four women with different backgrounds and interests. The women were photographed by Terry Richardson standing on a red carpet in front of a step-and-repeat backdrop plastered with the Kate Young for Target logo. They include Hailey Gates, a model who has appeared in ad campaigns for Opening Ceremony and editorial features for Lucky and Harper’s Bazaar; Nathalie Love, an aspiring actress who worked with Emma Roberts, James Franco and director Gia Coppola on an upcoming film; Lily Kwong, a model, writer and luxury brand ambassador who was featured in Vogue’s 120th anniversary issue as one of the 120 biggest fashion influencers, and Leigh Lezark, one third of the Misshapes. Target plans to hold a private event in Manhattan to celebrate the launch.