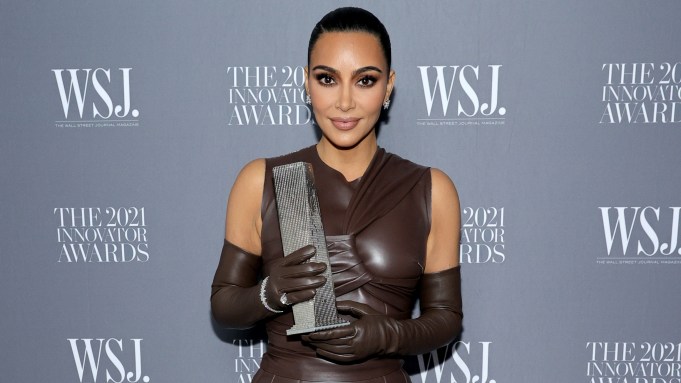 “Is there a designer in the house?”

Luckily for Kim Kardashian West, there was — and it was the one who collaborated with her on the Fendi x Skims skintight brown leather dress and matching gloves she wore to the WSJ. Innovator Awards at the Museum of Modern Art on Monday night. While it was an early glimpse of the collaboration between the Italian luxury house and her shapewear brand, perhaps it was a bit too early, since Kardashian West revealed that Kim Jones, Fendi’s artistic director of women’s wear and couture as well as head of men’s at Dior, had to save her from a “fashion emergency” by fixing her outfit at their table just before she went on stage to accept her award as brand innovator.

Safely sewn back up — or whatever repair was required — Kardashian West joked in her acceptance speech that she was so happy to finally have her own brand Skims shapewear, which she launched in 2019, that she is “truly passionate” about after years of being the face of multiple and sometimes conflicting brands.

“I just remember 15 years ago when I was starting my career, I could never have dreamed that I would be getting an Innovator award for brands. I mean, back in the day I would’ve been the face of any brand if they would have asked me — cupcakes to weight loss pills at the same time. I’m just so grateful that I have my own brand now. I would do all that and then wear shapewear on top. It was all contradictory,” she told the audience.

Earlier in the evening, she made a beeline at the glitzy dinner to speak to newly married couple Alexandre Arnault and Géraldine Guyot, showing them her jewelry. One can only imagine that it must have been from Tiffany & Co. since Arnault, the son of LVMH Moët Hennessy Louis Vuitton founder Bernard Arnault, is the brand’s executive vice president of product and communications.

Jones, who was accompanied by Demi Moore clad in a Fendi suit, also won an award, for fashion, and kept his acceptance speech short and sweet, stating that it meant a lot for him to win the award before rushing off stage.

This year’s other winners selected by WSJ.’s editors and featured on separate covers of the November Issue were Colson Whitehead for literature; Lewis Hamilton for sports; Lil Nas X for music; Maya Lin for art; Ryan Reynolds for entertainment and entrepreneurship, and Sesame Street for public service.

Lil Nas X, the 22-year-old rapper who is now one of the most-streamed artists in the world, walked the red carpet in clothes and bag by Thom Browne and sky-high shoes by Rick Owens. He told the audience when accepting his award that he has never been more himself. “It’s been a completely crazy, epic year. I’ve never been more myself. I’ve never been more gay,” to which the crowd burst into applause.

Reynolds, meanwhile, thanked his wife Blake Lively, who wasn’t in attendance. “She is a genius. She is a renaissance woman and she pushes me in ways I never imagined,” he said, joking that that sounded like something that should involve the police.