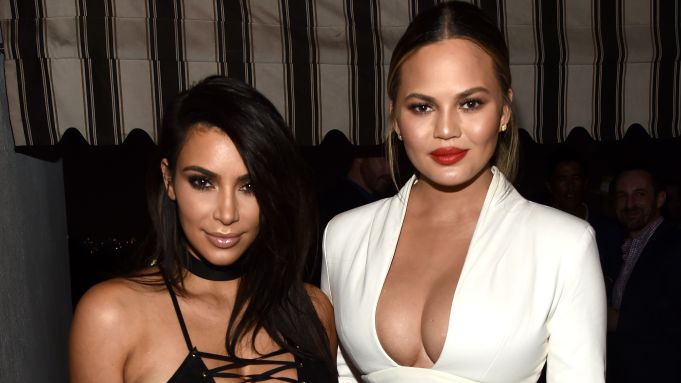 GQ editor in chief Jim Nelson hit Los Angeles on Tuesday night to toast July cover girl Kim Kardashian — along with Internet-breaking web traffic due to her scantily clad photos and an interview in which she called out Taylor Swift — with a cocktail party in the penthouse of West Hollywood’s Chateau Marmont. “I wanted to do the party in a sophisticated place that felt like it spoke to the spirit, aesthetic and ambition of the shoot itself,” said Nelson, who selected Kardashian for the magazine’s 10th “Love, Sex and Madness” issue because “she’s stunningly beautiful. It was also 10 years since ‘Keeping Up With the Kardashians’ [debuted].” Nelson seems to share Anna Wintour’s admiration for the reality star, adding, “For me, it was more about how she’s risen above all of it. She’s preserved and elevated herself. In a lot of ways, she and Kanye kind of represent the new American Dream, you know? It’s really interesting.”

Nelson enlisted photographers Mert Alas and Marcus Piggott to help re-create “the spirit of Helmut Newton” for the shoot. Asked whether he thinks the issue will be a top seller, he said, “I do know this — it already broke the Internet. We’ll have had the highest month of traffic ever. We broke one record the first day. We broke another record the second day. The third day, we thought it might slow down and so we pulled back a little bit on tech support and our site actually broke for like 20 minutes…which is not something you want to have happen, trust me, but it literally broke the Internet, so we’re thrilled about that.” Nelson said they “encouraged engagement” by rolling out one photo at a time on their web site in order to create “a sense of drama about it.”

Kardashian said she was happy to be on the cover. “GQ is iconic,” she said, adding that the shoot took place shortly after she gave birth to her second child Saint. “When I got the call to do their anniversary cover, the summer issue, I thought, ‘You know what? It’ll be a really good goal to motivate me to [stick to] my diet.”

The television personality said she has a couple new covers “in the works” that she “can’t really talk about.” She said she often chooses opportunities based on photographers. “I love them to have a vision, especially when I’ve never worked with a photographer before. Like, for this with GQ, I’d never worked with Mert Alas and Marcus Piggott before. I was dying to shoot with them, so to see their vision for me and use their hair and makeup and try a whole different thing and Jim [Moore] styling it? I love that. I love to see what people’s visions are for me.”

Photos from Kardashian’s shoot lined the hotel’s white walls like a makeshift art museum. The images got the seal of approval from her loved ones. “Oh my goodness! It’s gorgeous, like all her covers,” said Teigen, who once again seemed to be channeling the star in a white cleavage-baring dress and sleek hairdo. “There is no point in time where Kim will ever not look gorgeous.” Kardashian’s mother agreed. “She looks beautiful and strong,” said Jenner, adding that the family’s summer plans consist of shooting the show. “We’re rolling into season 13 in about a month.”