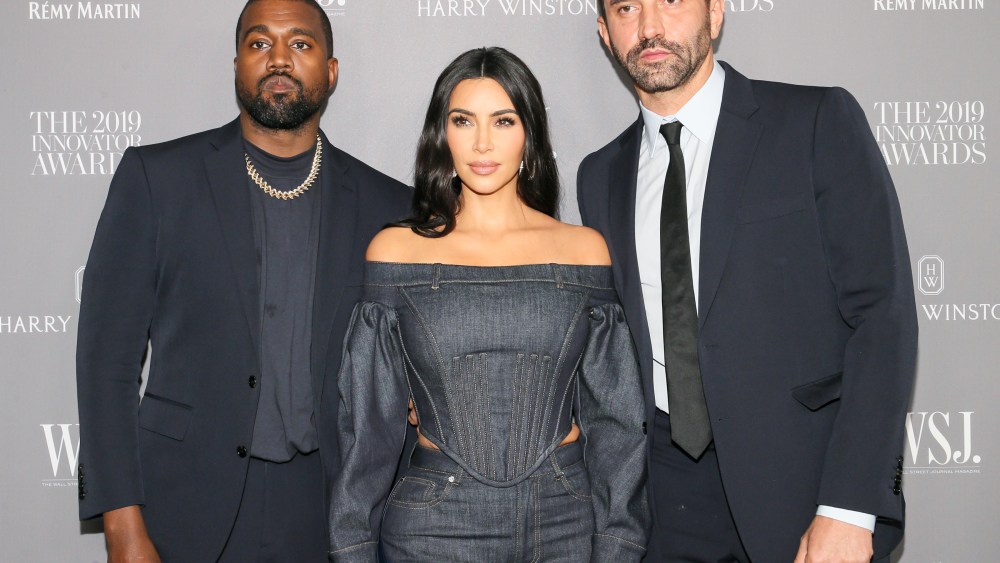 There has been the wedding dress, the magazine covers, the album design and the Instagram posts. The list goes on.

But if there was any doubt over the power couple’s adoration of the Italian designer, they made an appearance at Wednesday’s night’s WSJ. Magazine’s ninth annual Innovator Awards at the Museum of Modern Art in New York City to once again wax lyrical about Tisci, who was named Fashion Innovator.

Just before they presented the Burberry chief creative officer with his award on stage, they both praised him for how he always had their backs when many in the fashion world didn’t.

“He’d come to my fashion shows when everyone would diss my fashion shows and just be an amazing friend. I remember Carine [Roitfeld] and Riccardo locking arms and saying no one’s going to talk bad about Kim and we’re going to dress her,” West said, adding that some of those people that weren’t so nice were in the room.

Kardashian West, clad in eye-popping navy leather chaps, added that she was “so excited to be here for someone who has believed in me before I really knew what fashion was and even really believed in myself.”

But while the Kardashian-Wests were busy singing the praises of Tisci, the true star of the evening had to be social justice activist Bryan Stevenson.

Indeed, budding social justice activist Kardashian West was one of many attendees that made a beeline for him as soon as there was a break in the awards ceremony.

Introducing him on stage was comedian and ‘The Daily Show’ host Trevor Noah, who told the audience that his heroes have evolved over time.

“When I grew up, I obviously had superheroes like many young boys do. As I’ve grown up my heroes have evolved and changed over time. I used to love Batman. I thought he was a legend — going around Gotham, cleaning up the streets. I grew older and I realized he was a rich d–k,” he joked.

Stevenson, whose life has recently been made into a movie “Just Mercy” starring Michael B. Jordan, told the audience that his interest in becoming a lawyer stemmed from his childhood experiences growing up in Delaware.

“I grew up in a community where black children couldn’t go to public schools — lawyers came into our communities and made them open up the public schools. I was intrigued by this power lawyers had to protect disfavored people, disenfranchised people, marginalized people,” he recounted.

“I wanted that power so I went to law school and graduated, and for the last two decades I’ve been representing the poor, the accused, the condemned and the incarcerated and do it because we live in a country where in too many places we have a criminal justice system that treats you better if you’re rich and guilty than if you’re poor and innocent.”

Other honorees included actress Julianne Moore, actor and comedian Eddie Murphy, artist Cindy Sherman, rapper Tyler, The Creator, and architects Karl Fournier and Olivier Marty of Studio KO. All recipients will grace the covers of the magazine’s November issue, out this Saturday.

Editor Kristina O’Neill described all innovators as “cultural agitators,” who share a razor-sharp sense of the world as it is, as well a restless ambition for what it might be.

“They’re so finely attuned,” she added. “Their work creates the tremors that will soon be felt around the world. There are no easy paths to innovation. Real progress comes when inspiration and determination combine to reset our understanding of what’s possible.”

Jane Fonda Stops by Saks, but Ignores the Clothes