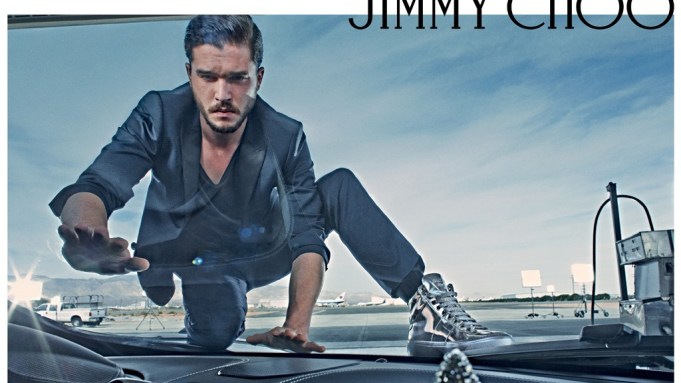 ANOTHER RETURN ENGAGEMENT: British actor Kit Harington is the face of Jimmy Choo’s men’s campaign for a second season, appearing in a series of futuristic-looking images shot by Steven Klein for the luxury accessories label’s spring campaign. The images picture Harington crouching on a sleek sports car’s windscreen wearing Jimmy Choo’s silver Belgravia high-top sneaker, or behind the wheel of the car’s moodily lit interior, wearing the Sloane slipper. The women’s images feature American model Ondria Hardin, her hair styled in a platinum crop, who was shot in the same industrial, air-hangar style setting. Harington, who is also the face of Jimmy Choo’s men’s fragrance, Jimmy Choo Man, is currently having a buzzy moment on both the big and small screen. He plays Jon Snow in “Game of Thrones,” and stars in the film “Testament of Youth,” based on a memoir of the First World War, set for release this week. Sandra Choi, creative director of Jimmy Choo, said that Harington “perfectly embodies the Jimmy Choo man,” praising his “cool attitude and smoldering sensuality.” Panos Yiapanis styled the campaign, while hair was by Shay Ashual and makeup by Val Garland, with Mary Howard the set designer.

There are also short films to accompany the ads, which will appear on Jimmy Choo’s YouTube channel. The print campaign will break in the weekly magazines in February, and in the March issues of monthly fashion and style titles.