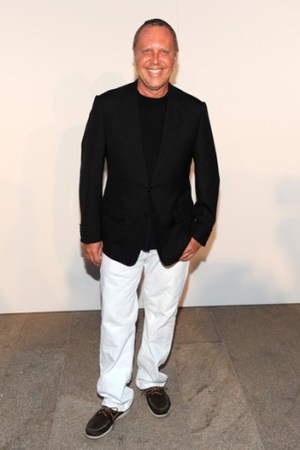 KORS SPEAKS OUT: Writer Dan Savage’s month-old “It Gets Better Project” just got a fashionable boost courtesy of Michael Kors. No stranger to cameras, Kors submitted a passionate video for the project on YouTube to help youth cope with issues of bullying and sexuality. In the minute-long clip, Kors recalled his own youth. “I heard every name called to me, and you know what, it wasn’t fun,” Kors said. “Pansy, fag, fruit — name it, I heard it. I wasn’t the kid on the baseball team. I wasn’t the kid on the football team. I sat sketching in my room…and my idea of a fun afternoon was shopping. And you know what? You feel different; you don’t fit in.”

Kors is one of several celebrities to have posted videos in recent weeks, ranging from Adam Lambert to Tim Gunn, Perez Hilton and Ke$ha. The designer said he took to the initiative after reading about a recent number of teen suicides as a result of bullying. He added that many executives in creative fields like fashion and entertainment were considered outcasts in their youth, and that ultimately only served to heighten their creativity. “It’s hard to realize that when you’re 11 years old and being kicked down the stairs at school,” he said. “This is not just about gay kids, it’s about all kids who aren’t status quo.”

He hopes his video will convey the notion that there is a bright future for everyone. “It’s also a call to arms to get more successful people in the public eye to say, ‘I will also post my story,’” he said. “That kind of support is something these kids need.”

TWO MINUTE WARNING: Sean Parker was one of the main attractions at Gilt Groupe’s inaugural Brand Summit on Wednesday, but his planned speech of more than a half-hour was cut down to just two minutes. Surprisingly, it had nothing to do with avoiding more talk about his portrayal as the villain in “The Social Network.” Parker lost his voice during a 10-day trip to Europe, where he was trying to do damage control in response to the movie. Ignoring doctor’s orders, he said a few words about the importance of innovation before moving on to the movie. “Don’t believe anything! It’s an unauthorized film!” Parker came to the event with Niche Media’s Jason Binn, who was recently named chief adviser to Gilt’s chairman, Kevin Ryan. “I was coughing up blood. I really shouldn’t be talking,” Parker told WWD. But he couldn’t resist talking fashion, noting that his jacket, tie and shirt were all Gucci. “I love Alexander McQueen, Dries Van Noten and Dior, but it hasn’t been as good since Hedi Slimane left.”

Parker shared billing with a few other vets of the start-up circuit, including Google’s Marissa Mayer, who boiled fashion down to raw data. Based on what users are searching for, Mayer said that plaid is out, five-toe running shoes are in (“Maybe not in a fashion sense,” she allowed) and, “Black is the new black.”

NOT EVEN A DREAM: Now that The Daily Beast and Newsweek merger talks have officially fallen apart, did Tina Brown ever daydream about the fun she could have if she ran Newsweek? “No, no,” she said Tuesday night at Cipriani 42nd Street at a gala celebrating The Norman Mailer Center and The Norman Mailer Writers Colony. “I could see a point down the line when it might have been fun,” she continued, raising an eyebrow. “Having done it, by the way, three times — turnaround things — I have no illusions about how hard it is to turn things around. It was because I knew how hard that was that I was very cautious. As was Barry [Diller, the Beast’s owner]. We both are quite unromantic about what it takes. We knew it was going to be a heck of a challenge, and a tough one.”

She reiterated her talking points — the governance structure wasn’t clear — and that she and Diller couldn’t get on the same page with Newsweek owner Sidney Harman about reporting structures.

But now that’s she’s once again devoted herself fully to life on the Web, has she bought into the iPad magic and bought one? “Yes I did! I love my iPad,” she said. She said she loved how it has “a sort of luxurious, glossy feel” to it.

But she added the Beast wouldn’t be building an iPad app any time soon.“We’re not having an iPad app yet because we feel the site already looks so great on the iPad, actually,” she said, referring to the way users can read it off Safari. She said considering how quickly things evolve and change in the digital world, it’s best to watch from the sidelines for now.

“We have to decide,” she continued. “At some stage, we probably will. But right now we decided not to do it immediately.”

SEXY OR OVER THE LINE?: GQ was singled out on Wednesday by the Parents Television Council for its racy November cover, which features “Glee” stars Cory Monteith, Dianna Agron and Lea Michele, and, according to the group, “borders on pedophilia.” It turns out the folks at Rolling Stone also have a bone to pick with GQ’s new cover. The Wenner Media title featured the Glee stars back in April, shot by Mark Seliger, with the headline “Glee Gone Wild.” GQ used the same headline on its new “Glee” cover. So, just a coincidence? “Absolutely,” said a GQ spokeswoman — presumably trying not to sound gleeful.