Lady Gaga is set to make a cameo on the Jan. 6 episode of "Launch My Line." 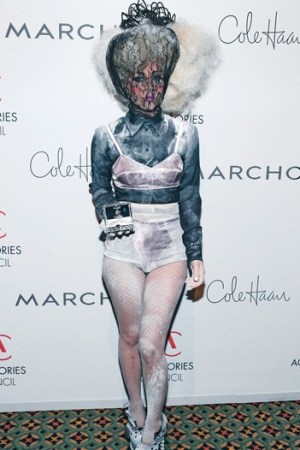 GOING GAGA: With a new album and “It” girl status, Lady Gaga has had no shortage of air time and she is about to get even more with a guest appearance on Bravo’s “Launch My Line.” The platinum-haired singer is set to make a cameo on the Jan. 6 show, challenging the aspiring designers to dream up a dress worthy of her whacked-out style. In a teaser for the show posted online, hosts Dean and Dan Caten ask their underlings, “If I were to say ‘Goo goo,’ you would say…” “Gaga,” the wannabees responded. “No, Lady Gaga,” they were told.

In other TV news, Starz is keeping a tight lid on the fashion show it has in development and doesn’t plan to give any clues about it for a few months, a company spokesman said. Once the program’s premise is revealed, there are likely to be plenty of people in the media and fashion worlds vying for face time, since Starz has more than 17.3 million subscribers.

OUT-AND-IN AT FOUR TIMES SQUARE: Those Condé Nast staffers working the notoriously sleepy week between Christmas and New Year’s got a scare just before noon Wednesday when the discovery of a suspicious vehicle parked near West 42nd Street and Broadway spurred the evacuation of the company’s 4 Times Square offices, as well as those of Nasdaq, 7 Times Square and 1460 Broadway. The area, in prep mode for tonight’s New Year’s Eve celebrations, was blocked off to vehicles and pedestrians during a swift police investigation that resulted in the clearance of the vehicle in question (a white van, which reportedly contained clothing, not explosives) and the reopening of the streets and buildings by the New York Police Department at around 1 p.m. Shortly thereafter, Condé Nast employees and the other evacuees were back at work. A Nasdaq spokesman added the incident did not affect trading.

SNOOZE YOU LOSE: Wednesday was the last time NPR’s Carl Kasell had to swat his alarm clock at 1 a.m. to man the desk at “Morning Edition.” After pushing back from the announcer’s chair one last time, he raised a glass of Champagne and tucked into the requisite send-off cake with staffers and well-wishers. But the 75-year-old journalist, who started his painfully early work days with the program’s debut newscast in 1979, will still be in the neighborhood. He is now a roving ambassador for NPR and will continue as a judge and scorekeeper for its weekly news show “Wait, Wait…Don’t Tell Me!” As for whether his body clock will adapt to sleeping in, he laughed, “Are you kidding?”

A classmate of Charles Kuralt at the University of North Carolina, Kasell provided another calming voice on the airwaves. In his 34 years at NPR, Kasell has delivered some bone-chilling news to the nation, none more so than word of the 9/11 terrorist attacks. While millions learned of the debacle through TV footage, Kasell had the challenge of giving the play-by-play with words. He recalled having two broadcasts, eight-and-a-half minutes to fill and scrambling to keep listeners up to speed, due to the rapid fire of events. His team did have the wherewithal not to run with a claim the State Department had been bombed since it could not be second sourced. “In instances like that, you don’t think about the challenge or what you’re doing — you just do it,” he said.

Filmmakers working on an NPR documentary trailed Kasell during Wednesday’s swan song as they had for the past two weeks. But public radio being what it is, the flick’s production is contingent on funding. Ever the behind-the-scenes newsman, Kasell wasn’t blinded by the camera lights. He said, “They are nice guys, though. They stay out of our way and we ignore them.”

MIGHTIER THAN THE SWORD: E.L. Doctorow, Don DeLillo, Kwame Anthony Appiah, Edward Albee, A.M. Homes and Honor Moore are expected to be among dozens of PEN American Center members protesting today on the Fifth Avenue steps of the New York Public Library. They will be rallying for the release of writer Liu Xiaobo, who was sentenced on Christmas to 11 years in prison in China. The 53-year-old already has spent more than a year in detention for criticizing the government and outlining extensive political change. He was one of 1,000 writers and journalists on PEN’s danger list. Organizers will not be asking for boycotts of any kind, just Xiaobo’s immediate release according to international law and China’s own constitution.