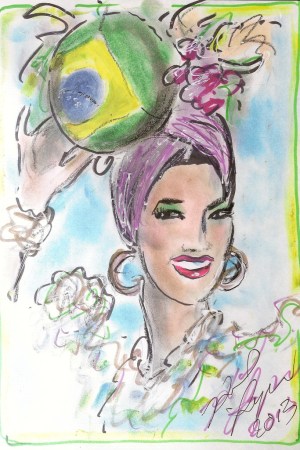 FOR KICKS: If model Gisele Bündchen ever played soccer for her homeland of Brazil, her jersey would carry the number “1.” At least that’s how Karl Lagerfeld sees things in a series of witty sketches he prepared for the latest issue of German soccer-meets-fashion magazine Sepp.

The designer, who has a four-season collaboration with Brazilian jelly-shoe giant Melissa, sketched one real-life Brazilian soccer star naked — clutching a ball for modesty’s sake — and another sitting cross-legged atop an Oscar Neimeyer building.

The issue came out over the weekend, timed coincide with the start of the FIFA Confederations Cup, and also features Yohji Yamamoto musing on sport and patriotism.