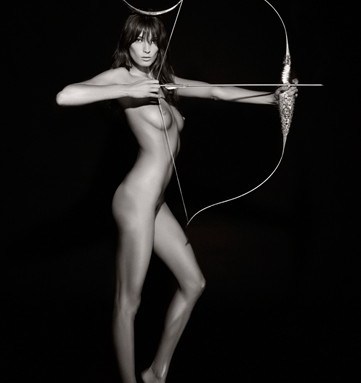 LAGERFELD’S DEITIES: Designer Karl Lagerfeld unveiled “Mythology,” the latest Pirelli calendar, at the Ritz-Carlton hotel here as temperatures plummeted to -16 C. Lagerfeld photographed models in his Paris studio for the coveted calendar, with each one posing as a different deity from ancient Rome and Greece. “I wanted to do something different. I looked at all the other calendars,” he said, adding his had a message “of timeless beauty and youth.” The calendar consists of 36 black-and-white images of 15 female models and 5 male models. Actress Julianne Moore is also photographed as Hera, the wife of Zeus. She was expected to attend a dinner tonight in honor of the launch at the Stanislavsky Theater. “With such a concept and boys and girls like this, it was an easy job,” said Lagerfeld, surrounded by models at a press conference. Lagerfeld described himself, slightly tongue in cheek, as “the visual version of [ancient Greek writer] Homer. I did with my camera what he did with his pen, although we understand that he probably didn’t use a pen.” “Pirelli is art, but with Karl it takes on a different level,” model/actress Elisa Sednaoui mused in a video screened at the launch.