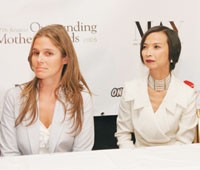 Some 200 guests attended the $300-a-seat affair, proceeds from which were donated to Women in Need, an organization that lends moral and financial support to homeless women and children.

“I really can do anything I want today because my mother [Jo Carole] is my constant baby-sitter,” said Lauder, senior vice president of global creative directions at Estée Lauder Cos., who has two sons.

Wells, editor in chief of Allure magazine, said, “When I told my two sons, Webster and Charlie, this morning about this award, Charlie said to me, ‘Mom, how long will you be the reigning champ of that?’”

As for Natori, chief executive officer of the Natori Co., her reaction was simply disbelief. “I can’t believe I’m here to get an award as a mother. I don’t think I was such a good mother. I only changed Kenneth’s diapers once and we never took him to Disney World,” she said.

Philbin, who offered Natori “tickets to Disney World, if you still want them,” said part of being a good mother to her two daughters, Joanne and Jennifer, was keeping their secrets from their father, Regis.

“The little secrets they would talk about at the dinner table would be repeated by Regis the next day on the TV show,” she said, noting that the last straw was when he read a love letter addressed to one of his daughters on TV. “The young admirer was so embarrassed he never spoke to my daughter again.”

McEntire said she never expected to receive the award, but noted, “I was raised on a ranch in Oklahoma. The work ethic my mommy and daddy taught me is priceless. They taught me that when you say something you mean it for real. It’s your word.”

This story first appeared in the May 6, 2005 issue of WWD. Subscribe Today.

Bastianich, a native of the former Yugoslavia, said she and her family escaped a Communist regime and lived in a welfare camp in Italy before coming to America when she was 10. She dedicated her award to her 84-year-old mother, Erminia, who was in the audience.

“Family is simply most important element of who we are,” she said. “It shapes our world.”