The YouTube star, better known as Léna Situations, has become a publishing sensation with her self-help book "Toujours Plus."

PARIS — Books written by YouTube stars may be a staple of the New York Times Bestseller list, but in France, a country where philosophers are household names, the genre still tends to be sniffed upon.

That is set to change after a self-help book written by 23-year-old influencer Léna Mahfouf, better known as Léna Situations, became the number-one selling book in France this fall, ruffling feathers among the literary establishment and cementing her position as one of the country’s top social media stars.

Mahfouf is part of a gang of influencers that also includes singer Bilal Hassani and fellow YouTuber Sulivan Gwed. Collectively, they are starting to make a mark on the local fashion scene, none more so than Mahfouf, who made her Paris Fashion Week debut at the Balmain show in February as a stand-in for documentary maker Loïc Prigent, who was stuck in quarantine.

She has since attended shows for Dior, Isabel Marant and Jacquemus, but believes that bar a few exceptions, France has been slower than other countries to embrace the new generation of entertainers thriving on YouTube, Instagram and TikTok.

“[Me and my fellow influencers] are pretty fascinated by what’s going on elsewhere in terms of entertainment, because we have the feeling that the doors have opened more easily and more quickly,” Mahfouf told WWD in a Zoom call.

“We want to show that we can also shine and that there is room for younger people, because entertainment in France is still very hierarchical. We have a certain heritage, and whenever something new emerges, it jars with the values of our heritage,” she said remarking on the weight of culture with a capital C.

“That influence is so strong that if your idea of entertainment is more lighthearted, less weighty, it’s considered degrading. It was the same when my book came out: people thought it was degrading that it should be number one in the charts, instead of a classic author like Victor Hugo,” she added. 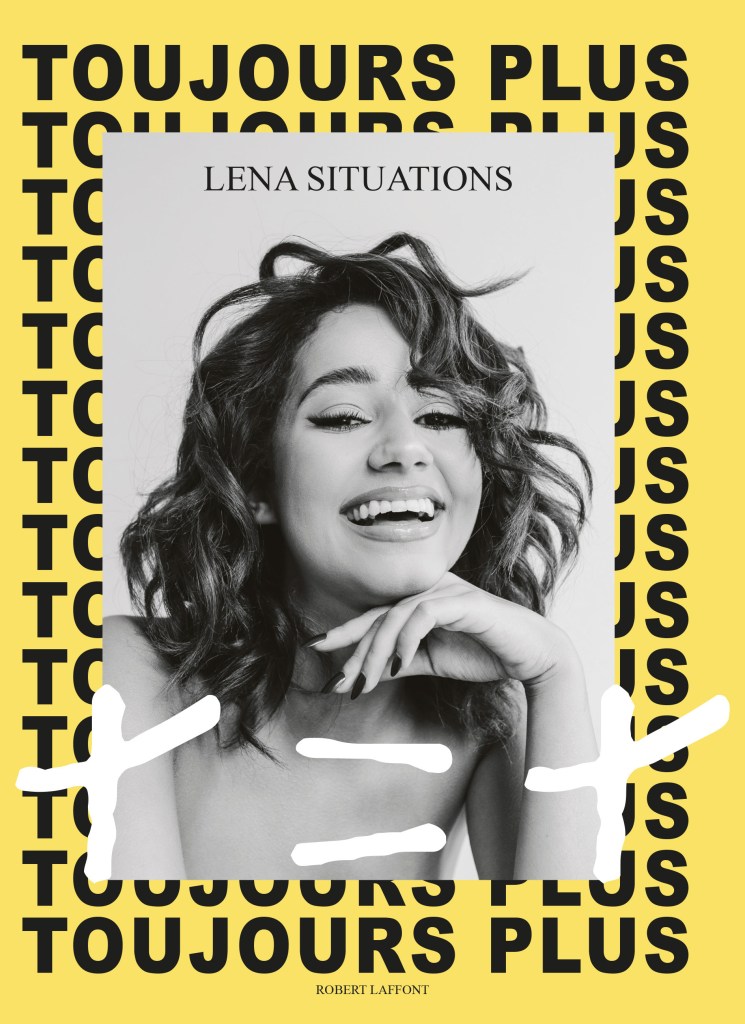 The cover of Léna Mahfouf’s best-selling book “Toujours Plus.”  Courtesy of Robert Laffont

Writer and critic Frédéric Beigbeder published a sarcastic review of “Toujours Plus” (“Always More”) in the French daily Le Figaro that only served to galvanize Mahfouf’s fan base, which includes 1.68 million subscribers on YouTube, 2.7 million followers on Instagram and 1.4 million followers on TikTok.

It also earned her an invitation to “Quotidien,” one of the country’s most popular television programs, where she deftly brushed off the criticism with a demonstration of the positive attitude she advocates in her book, which she sums up with her signature equation “+=+” – a symbol that stands for “positivity attracts positivity.”

It’s shorthand for Mahfouf’s brand of personal development, heavily inspired by the self-help books she discovered while living in the United States during her third year of studies in marketing and communications, specialized in fashion and luxury, at the Moda Domani business school in Paris.

“The book is just an extension of my YouTube videos which already had this positive message, because I discovered personal development and I thought to myself, ‘This is great!’” she recalled. “We should all be paying attention to our mental health and following our dreams. They should be teaching this stuff in school!”

Mahfouf was hesitant at first to publish the book during the coronavirus pandemic, but said the release on Sept. 22 was ultimately well-timed, as readers gravitated to the self-help section of bookstores. The book has sold 150,000 copies so far, and her publisher, Robert Laffont, is in talks to sell the U.S. and U.K. rights.

“What I enjoyed was getting young people into bookstores, and also getting older people to realize that what’s happening on social networks is maybe not as shallow as they thought,” Mahfouf said.

She was a late bloomer, by YouTube standards, posting her first videos at the age of 18 while juggling her studies and money-making gigs on the side. “I’m 23. In social media terms, that’s like being 60,” she said with a laugh. She credits the experience with helping her avoid the crash-and-burn syndrome that affects some YouTubers who rise to fame in their early teens. 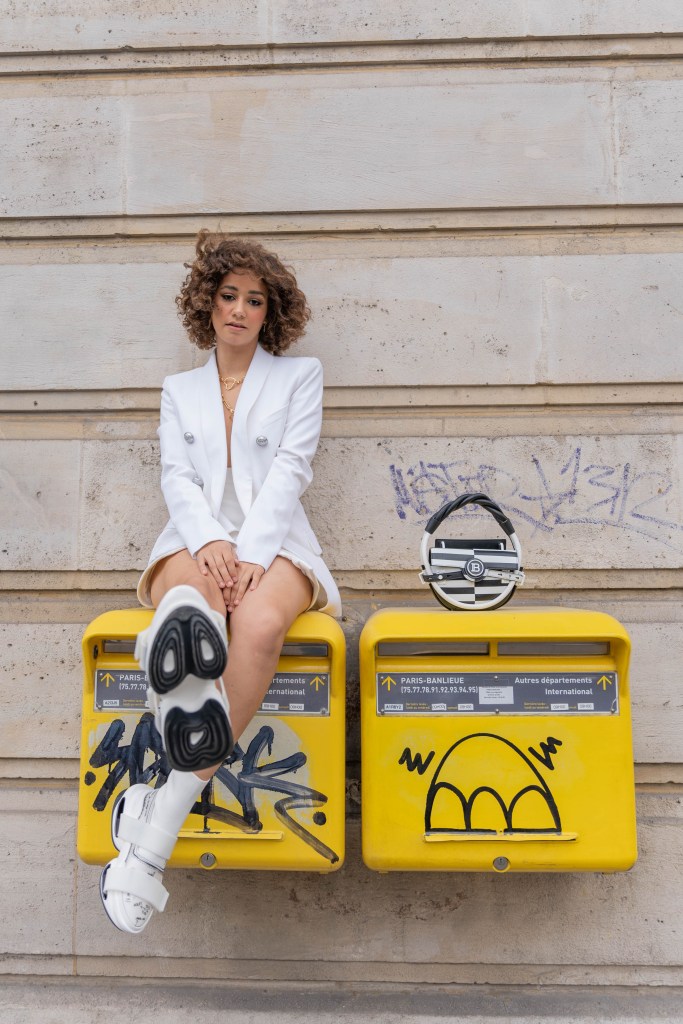 While she has weathered her share of embarrassing public moments, including a messy breakup last year and a subsequent spoof wedding in Las Vegas, they have only served to cement her reputation for authenticity. Mahfouf said she doesn’t feel pressure to fake it, even now that she’s branding herself as something of a self-help guru.

“Being my authentic self has definitely made me vulnerable, because now people know my weak spots,” said the influencer, who has struggled with anxiety issues in the past. As recently as May, Mahfouf was mocked by trolls for being flat-chested, after posting a picture that showed her wearing a low-cut dress.

“But I feel comfortable now on social networks, and with a community that has potentially read the book, so they might be less judgmental if someone is having a bad day. Maybe they’ll try to understand why. And in the book, I make clear that I’m not trying to promote some phony notion of happiness,” she said. “If I’m feeling anxious, I’ll say so. But then I’ll show that the following day, I feel better.”

Mahfouf is reaping the results of her approach. Last month, she won the French Social Star gong at the E! People’s Choice Awards for the second year in a row, and in the past 12 months, she has worked with brands including Dior, French Vogue, Zalando and Sephora.

As for what’s next, Mahfouf, who has a solid work ethic, hopes to emulate the career of Chiara Ferragni by launching her own brand. She has turned down offers for licensing deals because she wants to have full control of her business.

“I don’t know whether I will focus strictly on clothes, because I also love decorating and beauty, but the idea is to make products that reflect who I am. I don’t want to stick my name on licensed products. It would be an easy way to make a quick buck, but I’m not at all interested in doing that,” she said.

In the meantime, she’s enjoying producing content for other brands.

“I’m definitely seeing a difference since the publication of ‘Toujours Plus.’ I’m getting offers that better match my personality: no more basic product pitches. Brands are coming to me with more innovative ideas,” she said. “Communication is my number-one passion. They’ve understood that with me, they can have a little fun.”