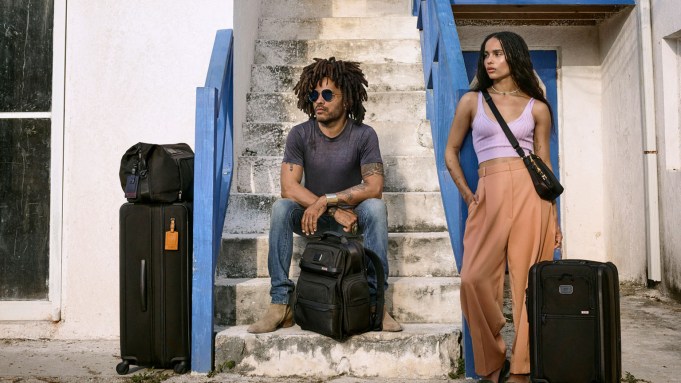 The campaign, directed by Eliot Rausch, was shot on the island of Eleuthera in the Bahamas, a location that established the soul of the Kravitz family. It’s the first time the father and daughter have been filmed together. Alan Silfen was the photographer.

“To me, this campaign is about connecting with ourselves, our roots and with each other,” said Zoë Kravitz. “I loved working with Tumi and the idea of telling a story about travel, family and connecting with one’s roots. It was amazing to travel to the other side of the island for my first time to see where my family originated from and to pay respect to our elders and those who came before us — to experience that with my father was monumental.”

Lenny Kravitz added, “I’ve been a Tumi customer and admirer of the brand for as long as I’ve been touring. When you’re traveling and living out of a suitcase, your luggage becomes an extension of your home — and yourself for that matter. It’s that one thing that’s always with you: on the plane, on the tour bus, in the hotel room, backstage or on set. So you want it to be reliable, durable and make a statement. For me, Tumi embodies all of those qualities to the fullest.” He called the campaign a “collaborative experience,” as he was involved in many creative aspects of the campaign.

The campaign features the Alpha 3, a new and improved product design.

“With the launch of A3, we took everything we stand for as a brand and pushed it one step further,” said Victor Sanz, creative director of Tumi. Alpha 3 will be offered in a wide range of travel products, backpacks, day bags and accessories. The collection retails from $35 to $1,175 at Tumi stores worldwide and on tumi.com.

The campaign will run globally across the brand’s social channels, including Facebook and Instagram, out-of-home and digital.