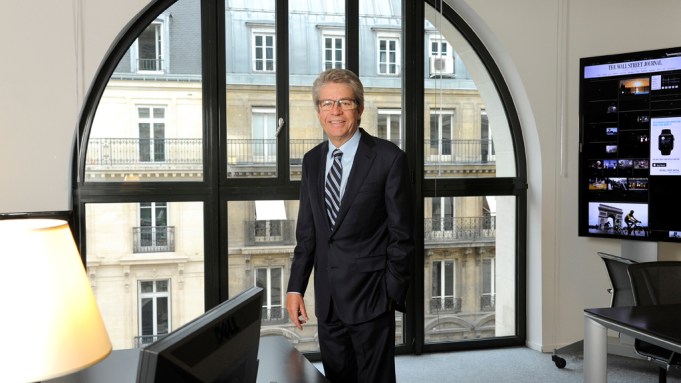 LVMH said in May that it had acquired daily newspaper Le Parisien and its national counterpart, Aujourd’hui en France, from the French family-owned Groupe Amaury. The transaction, the terms of which were not disclosed, is expected to close in November.

At first glance, the mainstream tabloid Le Parisien’s culture seems to be worlds apart from the luxury universe of the LVMH brands, which include Dom Pérignon, Ruinart and Veuve Clicquot Champagne; Dior; Louis Vuitton and Berluti. The popular television show “Le Petit Journal,” the French equivalent of “The Daily Show with Jon Stewart,” played on the atypical juxtaposition in a skit showing fountains of pricey Ruinart bubbly replacing a cheap kettle at Le Parisien’s office.

As LVMH expands its empire to include other titles (Le Parisien and Aujourd’hui en France will be under Les Echos Group’s aegis), Morel is the media man of the moment.

LVMH purchased Les Echos in 2007 from the U.K.’s Pearson (which recently disposed of its other media holdings, The Financial Times and The Economist), and Morel was tapped in 2011 to lead it. He came from for Socpresse, owner of Le Figaro, where he was ceo for seven years. Les Echos Group also owns the financial weekly Investir, radio station Radio Classique and arts magazine Connaissance des Arts.

The French media landscape has been busy of late. In addition to LVMH’s deal, in late July billionaire Patrick Drahi teamed up with media entrepreneur Alain Weill to bid for NextRadioTV, a group that owns one of the country’s biggest news channels. Drahi’s media assets already include France’s Libération and L’Express.

Meanwhile, French group Vivendi, the owner of Canal Plus, acquired an 80 percent stake in late June in the online video site Dailymotion, the French equivalent of YouTube.

WWD caught up with Morel in his office, a stone’s throw from Palais de la Bourse, in a Haussmannian building that served as Crédit Lyonnais’ former headquarters. Morel wore a tie, as is his tradition, and spoke about the purchase of Le Parisien, a new weekend magazine, and Swedish crime novels.

WWD: Some people think putting Les Echos and Le Parisien in the same group is like mixing oil and water. What are your thoughts?

Francis Morel: There’s no denying that the two brands editorially have nothing in common, but they are stronger together.

WWD: What is Les Echos Group’s bread and butter?

F.M.: Our main business is the financial daily Les Echos, whose paid circulation in France was 125,172 in 2014. We are the only French daily that grew in 2014, growing for the fourth year in a row, in the 2 percent range. In 2014, we logged the best circulation in the last 10 years. It shows that [the increases are] not a coup, but a long-term trend.

WWD: What are the growth drivers?

F.M.: It comes first of all from the quality of the editorial content and secondly from our digital development. Our digital growth has been 30 to 40 percent in the last three years. It more than makes up for the decrease in print [sales]. Today, digital subscribers represent 25 percent of our readership and it’s 80 percent if we add to the mix subscribers who [sign up] to both print and digital.

WWD: You are launching a new weekly magazine, which you consider to be a recruitment vehicle for new readers. How so?

F.M.: Monthly frequency is complicated for a supplement, so we struck our monthly business magazine Enjeux Les Echos and lifestyle weekend insert and replaced them with a freestanding weekly. The first issue comes out on Oct. 2. We are convinced we can attract new readers by offering a print subscription for the weekend only that comes with a digital subscription. We are also attracting a new type of advertiser because we are out of the daily paper [race].

WWD: The New York Times has T magazine; Le Monde, M, and L’Obs, O. Will you name your magazine E?

F.M.: No. [He laughed.] It will be Les Echos Week-end. Its cover has a white background [and] is different from M magazine and Figaro Magazine. We’ll never do a story on the François Hollande-Nicolas Sarkozy game. That isn’t for us. The magazine opens with an eight-page business story. We added to staff, hired a certain number of editorialists. Bénédicte Epinay will continue to oversee the lifestyle content. Fashion will play a large part. Fashion coverage will be different, simpler, less sophisticated than the one in Série Limitée, our high-end magazine. Série Limitée, which is the French answer to [The Financial Times’] How To Spend It, continues to exist. We have ideas to make it even more luxury-oriented. That’s set for early 2016.

WWD: What should fashion coverage consist of in a financial publication?

F.M.: For the weekly magazine, it’s all about stories, and for the daily it consists of covering the business of fashion. It’s a fascinating industry, with giants that dominate the market.

WWD: How do you see the recent acquisition of the FT Group by Japanese media corporation Nikkei Inc. from Pearson PLC for $1.32 billion? The amount is quite impressive.

F.M.: It is. It proves that newspaper brands are equities that are extremely valuable, even more so in the digital world. The Financial Times has remarkably achieved its digitalization. In the digital landscape where there’s an explosion of brands, credible brands are even more powerful. It’s what makes the FT worth $1.32 billion.

WWD: On the French market, on the other hand, newsweekly Le Nouvel Obs was sold last year for only 13.4 million euros [or $14.9 million at current exchange].

F.M.: That transaction doesn’t reflect the market. It wasn’t sold at market price. Bravo to those [Pierre Bergé, Xavier Niel and Matthieu Pigasse] who acquired it under such conditions. But that price is nonsense. What I see is the consolidation happening in the media sphere, in the U.S., in France. Isolated media cannot survive. You need two things — a strong brand and to be part of a group. So we need to continue to build our brands and support them with groups.

WWD: There is a wave of acquisitions on the French media landscape. Will Les Echos make more acquisitions?

F.M.: Le Monde group’s or Le Figaro’s [sales] are around 400 millions euros [$445 million at current exchange]. We will be around 400 [million euros], [so] we play in the same league. What the future will hold, we’ll see. What is fascinating is the speed of transformation happening in the digital sphere.

WWD: What is specific to the French media market?

F.M.: I am not sure there are specificities. What we see everywhere is: One, the digitalization of our brands, and two, the diversification. There are always activities to develop to complement the main business of media. We launched Les Echos Solutions in June with services ranging from crowdfunding to market studies and incubators for start-up companies. We are developing a publishing arm for companies with a separate staff. Services will represent one-third of the group sales in 2016. Down the road, they could be up to 45 percent of Les Echos’ business. We define ourselves as “the first media outlet for information and services,” which makes us stand out. On the services front, I think we are at the forefront.

F.M.: We were the first to erect a paywall in France. It was a very good decision that has allowed us to have digital subscribers. Now, readers have access to five free stories, plus three additional free ones when they sign up.  We are constantly looking at evolving [the model].

WWD: In which direction?

F.M.: To have readers hit it sooner. I think as long as it works, we can aim at a smaller number of free stories.

F.M.: I don’t know. I am not there yet. Readership is extremely different, and Les Echos’ recipes for success probably don’t work for Le Parisien.

WWD: How do you work with your parent company LVMH?

F.M.: I present them with our projects, strategic plan and budget. It is a simple and direct relationship that is effective. In fact, each time we have been willing to make new developments, LVHM has supported us. The Parisien deal proves it.

WWD: It’s unusual for an industrial group to own a media outlet.

F.M.: If the shareholder plays its part, which is to allow its development, it doesn’t matter if the shareholder is a media or an industrial group, as long as the media keeps its editorial line. Les Echos group was severely hit by the 2008 crisis. LVMH kept supporting it through the shaky times through to our latest developments.

WWD: What’s your daily routine when it comes to newspapers?

F.M.: I read Les Echos, Le Figaro, Le Monde and Le Parisien. Now, I would put Le Parisien in second, or I’ll get slapped on my wrist. [He laughed.] I read Vanity Fair, both the American and French versions. I have been a reader of the American Vanity Fair for years. It’s a remarkable magazine. The feature on Caitlyn Jenner [in the July issue] was remarkable because of the human aspect.

WWD: Is language a limitation for French media?

F.M.: Circulation of the FT in the U.K. is about the same as Les Echos in France. But the FT circulation in its domestic market is very small compared to its global circulation. Our market is more limited. The New York Times, The Wall Street Journal and the Financial Times are the three global newspapers.

WWD: Let’s end our interview with an “Oprah’s Book Club” question: What were your summer reads?

F.M.: I like crime novels. I bought “Daisy Sisters” by Henning Mankell, a Swedish crime writer. The novel is set in the Forties. I had read his book “Italian Shoes,” which I strongly recommend [about] a man who lives on an island in Sweden. A young woman arrives and tells him she is his daughter and her mother is dying. That’s the pitch. Also, I keep buying “Réparer les vivants” by French author Maylis de Kerangal [to be released in February by Farrar, Straus and Giroux in English as “The Heart,” translated by Sam Taylor]. It’s about a young surfer who dies, and everyone is debating what to do with the organs; I keep buying it as gifts.