The French firm has its models chasing after frisky dogs, hopping over police barricades and literally dancing in the streets for its spring-summer spots. 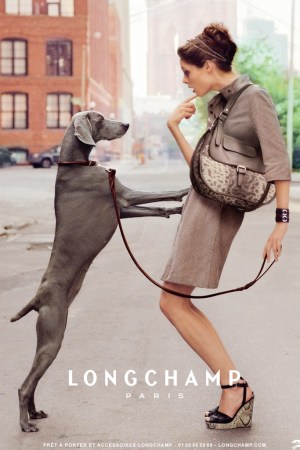 LET’S DANCE: Forget about simply posing in an ad campaign. Longchamp had its models chasing after frisky dogs, hopping over police barricades and literally dancing in the streets for its spring-summer spots, slated to break in February magazines.

The French firm even enlisted an acclaimed choreographer, Blanca Li, to direct all the action, setting Canadian models Coco Rocha and Liisa Winkler cavorting through Manhattan and Dumbo on snake-print platforms, swinging their leather Pliage bags.

“We really wanted to show this woman very active in the city, very dynamic,” said Sophie Delafontaine, head of design at the family-owned house, which has recently branched out from its core leather goods into ready-to-wear, footwear and other accessories.

The campaign, with a pair of 60-second clips directed by Li the focus of its digital component, marks a break from previous campaigns centered on models such as Kate Moss and Audrey Marnay.

Marie-Sabine Leclercq, head of global communications at Longchamp, said the goal is to position the brand “through a strong and recognizable concept,” which it dubs “creative movement.” She declined to specify budgets for the new campaign, but said they would increase, given the worldwide reach and important outdoor placements.

Dovetailing with its life-in-motion campaign, Longchamp is the principal sponsor of the “Danse sa vie,” or “Dancing through life,” exhibition currently on at the Centre Pompidou in Paris. It explores the dialog between artists and choreography from 1900 through the present via works from Henri Matisse through to Matthew Barney.

Longchamp hired a new agency, Air Paris, to realize a campaign its head creative director Tho Van Tran describes as “a bit unconventional, and nonstatic in all senses of the word.”

He tapped photographer Dane Shitagi, known for his portraits of dancers from the New York City Ballet, to capture scenarios loosely based on musical comedies and recalling the arch elegance of fashion editorials from the Fifties and Sixties.

Enter Li, who had Rocha teetering on tiptoes, Winkler splaying her endless legs and professional dancer Alexia Level twirling like the pro she is. “Movement brings a lot of freshness and youth,” Li said. “Even an older person who moves well feels young.”