The designer's new docu-series, “XOX Betsey Johnson,” which stars Johnson, 70, and her daughter Lulu, 38, premieres this Sunday on the Style Network at 8 p.m. 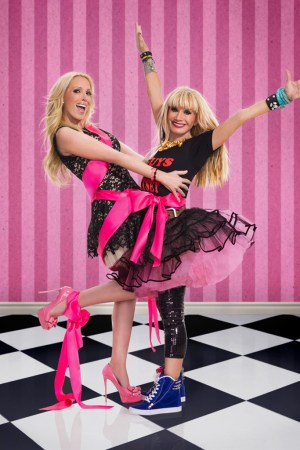 LIFE IN BETSEYVILLE: Betsey Johnson’s new docu-series, “XOX Betsey Johnson,” which stars Johnson, 70, and her daughter Lulu, 38, premieres this Sunday on the Style Network at 8 p.m. The show, appropriately timed to Mother’s Day, reveals that Betsey and Lulu’s relationship has classic mother-daughter tension and is not all cartwheels and roses.

“I’m just going to go crazy until this show hits Sunday night,” said Johnson, in a telephone interview. “Imagine yourself, you haven’t seen more than 10 or 15 minutes of footage, and every time an ad comes on, you say, ‘Am I doing a reality show?’”

The first one-hour episode (there are eight in total) gives a brief synopsis of Johnson’s meteoric rise in the Seventies, building a big, profitable business with sales in the millions, becoming the “go-to” designer for party dresses and dressing celebrities such as Katy Perry, Nicki Minaj and Rihanna. It then fast forwards to her abrupt fall into bankruptcy in 2012, when she was forced to shutter all her Betsey Johnson stores.

The show explores Betsey’s complex relationship with her daughter, and how when she raised her as a single parent they were “joined at the hip and throat.” When Lulu gets divorced and ends up living in Betsey’s apartment building, Betsey clearly gets on Lulu’s nerves. Lulu finds her mother distracting, insulting her lifestyle choices, and feels claustrophobic with her mother meddling in her life.

As Betsey explained, it’s hard for kids to grow up with famous parents, or in her case, “lowly famous parents.” She said Lulu puts herself out there in the raw. “She’s like in a birthday suit. She goes through a divorce situation,” said Betsey, who briefly had to interrupt the telephone interview to take a call from her daughter, who had been skydiving on Long Island that day.

Betsey and Lulu are seen at a “couples” therapist’s office trying to work out their mother-daughter problems. “Sometimes she’s really short with me,” says Betsey in the first episode. Replies Lulu, “I don’t want to be mean to my mother, but I still need some space.”

Betsey believes that Lulu is the one who the audience will mostly be able to relate to. “She’s going through stuff the mainline viewer is experiencing. When the show hits, good, bad or ugly, it will hopefully set Lulu in a direction she loves going in,” said Betsey.

Lulu wants to launch her own apparel business, and their design aesthetic couldn’t be more different. “We’re a real Mutt and Jeff. We’re total yin and yang,” said Betsey. “We’re totally opposite visually, and totally the same when it comes down to us personally. Our heartstring plays the same song. As for aesthetics, I’m all the toots and whistles. I’m the woo-hoo, over the top. Lulu is the much more sleek, grown up, womanly, less is more, where I’m more ‘more is more.’”

Betsey, who’s no stranger to the limelight, said she loved having the cameras follow her around.

“I’m a life-long cheerleader and like to be bouncing around. I thought it would be a real piece of cake,” she said. The cameras followed the ups and downs of her fashion career during a very difficult year, and she was comfortable with that, but it’s really the relationship with Lulu that’s “the glue that holds the show together,” said Betsey.

The series also explores Betsey’s business relationship with her new financial backer, Steve Madden, and her fears of having to work for someone for the first time. Betsey’s worried that she’ll be unable to take orders from someone else. “With my old company, I called all the shots. I guess I shot a lot crooked because we ended up going bankrupt,” she says in the first episode.

But now Betsey is feeling much better about the business partnership.

“I’m feeling a little bit like a queen because of what the reality show has done for me…the press, and the exposure. We really went through a tough year, and had a tough time, and working in a big corporate situation and not being in a little family business. We’re doing really well now. We’re frozen until we know whether this show is going to work. If it’s going to work, I want to make many more products to wear and show off,” she said, adding, “It’s all about ratings.”