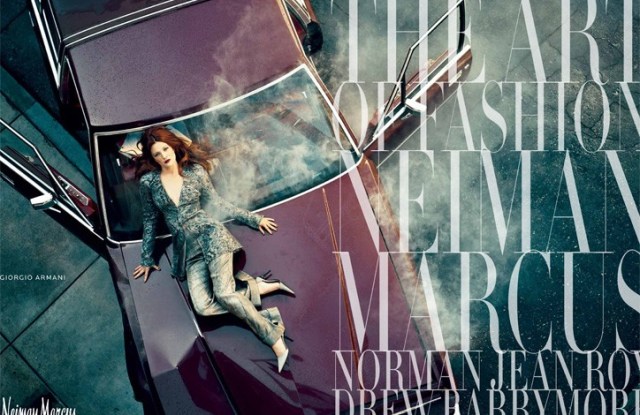 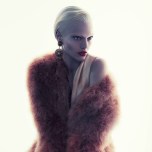 LIGHTS, CAMERA, FASHION RETAILING: Neiman Marcus is summoning the lure of mid-century Hollywood with a cinematic fall advertising campaign featuring a modern-day actress, Drew Barrymore, and a celebrated photographer of the genre, Norman Jean Roy. It’s only the second time the Dallas-based luxury retailer has tapped a celebrity since it launched its “Art of Fashion” spots in 1994 (Jennifer Jason Leigh was the first). “The shoot tells the story of a star’s transformation and Ms. Barrymore had a strong hand in the execution, even down to having a point of view on hair styling,” said Eddie Nunns, vice president of Neiman Marcus brand creative. “She’s a powerful, modern woman with trans-generational appeal.”

The multipage campaign breaks in the September issues of Vogue, Vanity Fair and W, along with a digital version of the campaign for iPads in collaboration with Vanity Fair.

Her hair dyed a dramatic shade of red, Barrymore projects uberconfidence as she reads a script, perches on a director’s chair or drapes herself over a crumpled car wearing an array of designer fashions, from Akris to Valentino.

TAVI TEEN SPIRIT: Most teenagers don’t wake up from slumber parties with a book proposal, but that’s exactly what happened in May when Tavi Gevinson, the blogger behind Thestylerookie.com and a rising high school sophomore, had a sleepover with author Marisa Meltzer in Chicago. Overnight the two cooked up the idea for “Diary,” a book about “the state of being a teenager,” according to the ’zine-style proposal they sent out to publishers on Wednesday morning.

The proposal suggests a hodge-podge of material: the book will be one part make-your-own scrapbook, one part feminist manifesto for girls and one part celebrity memento collage, featuring art made by Miranda July or Rodarte’s Mulleavy sisters when they were young. It will also include plenty of less heady material: instructions on “how to make a friendship bracelet,” entries on “why crushes are so essentially teenage” and perhaps a page to design your own tote bag or “dream pizza.”

“The core audience I do think is teens to early twentysomethings, but I really do think it will have a significant audience in the twenty- or thirtysomething young women demographic in the fashion world,” said Melissa Flashman, who is representing the book. “The soonest this could come out would probably be a year from now, but it might be longer,” she added. “That’s a pretty quick schedule.”

Gevinson will be in town next week to meet with publishers. She is also working on a coffee-table book with Rizzoli, based on her blog, and gearing up for the launch of her Web site and magazine collaboration with Jane Pratt. The details still haven’t been set, but the Web site has been tentatively named Rookie.com and is scheduled to launch in September.

Meltzer, 34, is the author of two books — “How Sassy Changed My Life” (with Kara Jesella) and “Girl Power” — and works full-time as a freelancer in New York.

MODEL CITIZENS: Giorgio Armani has called on models Sasha Pivovarova and Diego Fragoso for his fall ad campaign. Mert Alas and Marcus Piggott photographed the models in London. Pivovarova, who appears with a sleek, platinum blonde hairdo and dramatic makeup, last appeared in the designer’s spring and makeup campaigns in 2009, while Fragoso appears in Armani’s ads for the first time. The campaign will bow internationally in September.

As for the latest Giorgio Armani Eyewear campaign, the designer’s customers take center stage by actually fronting the ads. At the end of 2010, several bloggers, including Tommy Ton of Jak & Jil, Jared Eng of Just Jared and Yvan Rodic of Face Hunter, started photographing people on the streets wearing Armani glasses in major cities around the world. These images, displayed in black-and-white grids, now form the ad campaign, a project dubbed “Frames of Your Life,” which will continue in 2012.

ADDITIONS: Stephanie Trong, deputy digital editor at Lucky, has signed on at Nymag.com as fashion editor. She succeeds Ashlea Halpern, who left last year. Trong will oversee all fashion, beauty and shopping coverage at the site, which includes The Cut blog and all fashion week coverage. Prior to joining Lucky, Trong was editorial director at Gilt Groupe.

Meanwhile, it’s been a busy summer at Departures, with Heather Halberstadt signing on as features director. Halberstadt was senior editor at WSJ and before that, was at Vanity Fair. She’ll be joined by Jessica Flint, the magazine’s new digital editor who is leaving Bloomberg BusinessWeek. Wendy Goodman has officially signed on as editor of the new home and design section at Departures and will continue her work as design editor of New York magazine and Alexandra Wolfe will become a regular columnist for the magazine’s New Think section.