Liketoknow.it’s Journey From Influencers to Magazines

The app is teaming up with HGTV Magazine as its official shopping partner.

Influencer-heavy shopping app Liketoknow.it is getting into magazines.

With new technology, the app, owned by blogger monetization platform RewardStyle, is beginning Monday teaming up with Hearst’s HGTV Magazine as its official shopping partner.

Readers who download the app to their smartphones will be able to use it to shop products featured in the monthly interior design publication, from gift guides to entire room spreads down to the paint. Each product will be linked directly to the app so they can find out how much the item costs, and how to purchase it directly.

“HGTV Magazine really prides themselves on being very accessible and a shopping-driven magazine in the home space. By partnering with the Liketoknow.it app, it will make it easier to bring these pages to life for their readers,” Amber Venz Box, cofounder and president of RewardStyle, said.

“Not only are you just inspired by what you can see in the magazine, but literally at the tips of your fingers you can buy anything that’s purchasable from all of the pages,” she added. 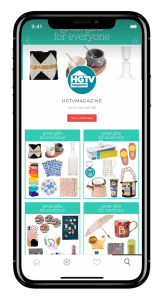 On its decision to partner up, Sara Peterson, editor in chief of HGTV Magazine, told WWD it has so many shoppable pages in the magazine every month so “why not share them with an even bigger audience.”

According to Venz Box, the partnership with HGTV Magazine is just the beginning. She’s in talks with other magazines and also looking at other forms of media, such as television. “This is just the first of many types of media companies that will be using the Liketoknow.it app.”

The move could be viewed as a slight change in direction from its bread and butter influencer strategy. Since its launch in 2014, the shoppable content platform has relied on influencers to drive traffic and its efforts have paid off. There are now 50,000-plus influencers on the platform and nearly 30 percent of the sales that influencers drive to retailers come from Liketoknow.it.

Earlier this year, the app, which has around 10 million annual shoppers spending $300 million, expanded into video with the launch of its own YouTube channel. In partnership with influencers like Aimee Song and Zoella, Liketoknow.it shares shoppable fashion and beauty videos that live on its YouTube channel and in its app.