Lingerie Heats Up the Castle on ‘The White Queen’

The come-hither appeal of wispy little slips, chemises and nighties are the weapons of seduction in the historical fiction drama set to air Aug. 10 on Starz. 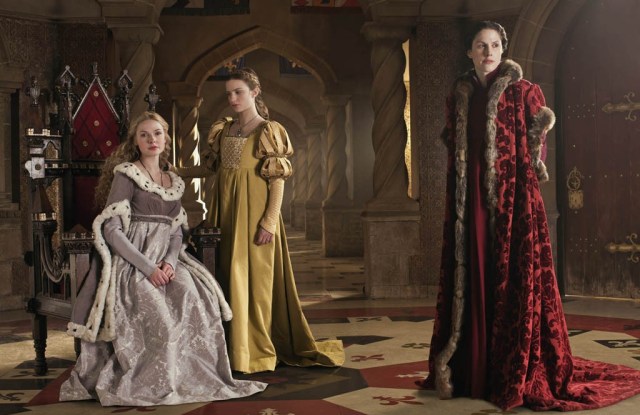 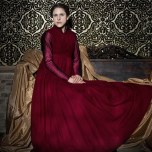 It was a no-frills century.

No lace, no corsetry and no bloomers.

But the come-hither appeal of wispy little slips, chemises and nighties — along with the occasional garter and hose — were the weapons of seduction for the ladies of the royal court, according to Nic Ede, costume designer for the historical fiction drama “The White Queen.”

Set to air Aug. 10 on Starz, the medieval miniseries takes place in England in 1464, during The War of the Roses. Edward IV of England, played by Max Irons, meets his true love on a roadside, a commoner named Elizabeth Woodville [Rebecca Ferguson] whom he weds.

“I never used underwear with the clothes, just shifts that looked sort of like nighties,” said Ede. “Sometimes we used a bra just to give a little cleavage, but the high-waisted bodices of the court gowns give the proper support. Bloomers were to come later in history. The men simply wore a breech cloth, the same as you would see on Christ on the Cross…almost like boxers gathered on a drawstring. It was not an attractive [under] garment.”

Ede — a 30-year veteran of the film industry whose costume design credits include “Hysteria” starring Maggie Gyllenhaal and “Me and Orson Welles” with Claire Danes — said the “ubiquitous shift” often doubled as a sleep gown.

“The night gowns were not dissimilar to those worn by a Victorian….The shifts were of linen, a fine cotton and a very fine wool to keep warm during the winter. This was really the case up until the Victorians, and even the Georgians,” explained Ede. “They lived very hearty lives, played a lot of outdoor games and ate tremendous amounts of food so the calories would keep them warm in the cold castles.”

Ede noted that lace gained popularity later, especially during the reign of Elizabeth I.

“Lace for me is the next century, the Elizabethan and Stuarts era. Using no lace makes it look like the period. I focused on a very minimal silhouette and let the textiles talk for themselves,” said Ede, who used an average of 10 yards of brocade, velvet and silk for each gown.

Ede said the austere period of “The White Queen” mirrors the personality of Woodville.

“I wanted to show a woman who had not forgotten her humble background. All of her court gowns are very simple. I dressed Max a little like the Sun King — light and airy,” he said.

Legwear was a key accessory worn by both men and women.

“Men wore stockings, but there was no Lycra or anything elastic back then, so the stockings got very baggy. I decided not to use tights on the men, so I used padded trousers, which were fine to use because in Britain it was bloody cold. We put the women in cotton stockings that were held up with a garter,” Ede revealed. “We actually used contemporary tights, but you never see them in the series.”