InStyle enlists the help of designers to dress the porcine prima donna in its November issue. 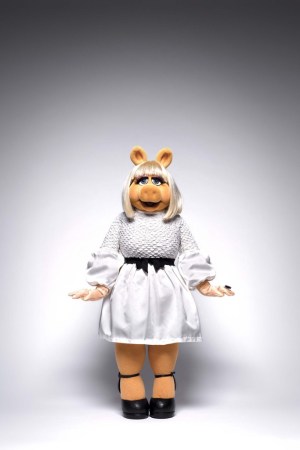 LIPSTICK ON A PIG: Miss Piggy may take on the plus-size role of a Vogue Paris editor in the upcoming “The Muppets” movie from Disney — but that didn’t stop InStyle from featuring her in an eight-page spread in its November issue that hits newsstands Friday. The magazine enlisted Jason Wu, Prabal Gurung, Opening Ceremony, Suno, Brian Atwood and Giles & Brother to design custom creations for the porcine prima donna. “I didn’t want to dress Miss Piggy in anything that would take away from her bold personality so I went with a simple, classic dress and neutral color,” Gurung told WWD of his belted dress in white duchesse silk. “The Empire waist really complements her figure.”

Wu, however, went a little more showy with his design. “Her humor, flamboyance and joie de vivre inspired me to design a decadent feathered dress that features her most sensational qualities,” he explained.

This story first appeared in the October 18, 2011 issue of WWD. Subscribe Today.

When it came to shoes, Atwood carefully considered the screen siren’s gams. “The strappy sandal seemed to work best to complement her hoofs,” he noted.

“Although Miss Piggy hasn’t been seen on the big screen in 12 years, her appeal is timeless,” observed Ariel Foxman, managing editor of InStyle. “This style maven is living proof that confidence — and a whole lot of it — can get you everywhere.”

The blonde starlet, who’s been hoofing it in show biz for 35 years, has been on a marketing blitz to promote her new film, out Nov. 23.

She attended Fashion’s Night Out at Opening Ceremony; will serve as a guest judge on “Project Runway All-Stars,” and collaborated with MAC Cosmetics on a limited edition makeup line, out Nov. 14. “Style is about expressing your inner self, capturing your personal ethos, and, most importantly, spending someone else’s money,” Miss Piggy herself says in the InStyle story.