Due out in March, the 356-page book is being published by Les Editions Louis Vuitton and Les Editions Gallimard. 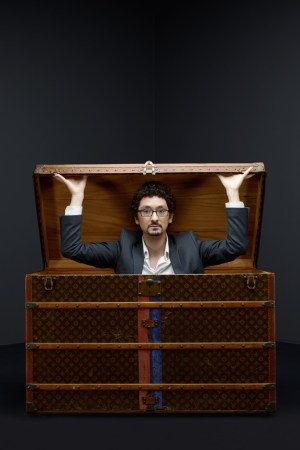 LITERARY BAGGAGE: Louis Vuitton’s grandson Gaston-Louis Vuitton was a trunk aficionado, as his collection of photographs and newspaper cuttings attest. It was these that 11 French writers were granted access to for inspiration. The resulting short stories — by Éliette Abécassis, Fabienne Berthaud, Marie Darrieussecq, Virginie Despentes, Nicolas d’Estienne d’Orves, Patrick Eudeline, David Foenkinos, Philippe Jaenada, Yann Moix, Véronique Ovaldé and Bruno de Stabenrath — have a narration that begins literally inside a trunk. Aptly, the pieces have been assembled in an anthology entitled “The Trunk.”

Due out in March, the 356-page book is being published by Les Editions Louis Vuitton and Les Editions Gallimard.

A limited-edition, leather-bound version will be available — in French, English and Japanese — in Louis Vuitton stores and through louisvuitton.com for 50 euros, or $66 at current exchange. The bookstore edition will be in French.