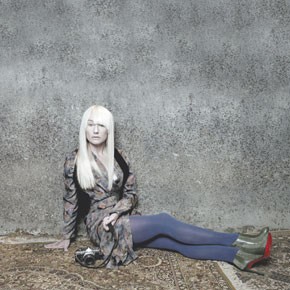 The Botticelli-esque piano chanteuse is back, this time with a bevy of fashion-forward alter egos. They’re known as the American Doll Posse — Santa, Clyde, Isabel, Pip and, of course, Tori — and they’re a force to be reckoned with.

On the double album “American Doll Posse,” to be released May 1, Tori Amos channels these four personas, dubbing them the “dismembered feminine re-membered.” In other words, they individually embody different female archetypes but together are a balanced female essence — that may or may not be the total Tori. “My role as the main composer is to try and articulate their perceptions,” explains Amos. “It’s been really important to step back and allow other voices and style tastes to take over my one-women show.”

Each persona sings about five tracks of the 23, all telling stories focusing on different themes. Santa explores sexuality with sacredness; Clyde is introspective, focusing on the individual’s internal war; Isabel, with her camera in hand, is the observer interested in what’s happening historically in the U.S.; Pip dissects the understanding of power via mind control and manipulation. To dig deeper into the lives of these four, join the hunt for their daily blogs posted throughout the Internet where interesting tidbits can be found, such as the fact that Pip’s father was a senior analyst for the CIA.

“I’d say the album is representing the American woman as I studied her on tour last time. The work deals with questions I found women had about those in power,” says Amos, referring to her Summer of Sin tour that supported 2005’s “The Beekeeper,” her fifth album to make its debut in the top 10.

Along with dreaming up back-stories for “the girls” (she’s also referred to her songs as “the girls”), Amos spent almost a year with her longtime stylist/visual collaborator Karen Binns inventing their individual styles. “We did something like this before [2001’s “Strange Little Girls”] that was so successful because it reaches so many different types of personalities and women,” explains Binns. “Tori’s always had a slight Cindy Sherman backdrop. She reflects a girl who changes all the time. Inside, she’s Tori, but she likes to promote women to constantly reinvent themselves.” For the album cover, Amos and Binns chose an Antonio Berardi dress for Santa, a Vivienne Westwood dress for Clyde, a Julia Clancy top and knickerbockers for Isabel, an Unconditional dress paired with rubber tights for Pip and a Basso & Brooke dress for Tori. “I saw it as kind of a David Lynch version of a rock band,” Binn says.

The American Doll Posse Tour, which kicks off May 28 in Rome, will display each member’s favorite designer, although Amos expects to have only two wardrobe changes per show. “My goal isn’t how many girls I can channel onstage in a two-hour time frame; my goal is that you get a narrative every night and that you experience one of the other women fully as well as a Tori show. So if you want to see them all, you have to come to four shows.”

Amos prefers to support up-and-coming designers, so when planning this tour, she and Binns showcased emerging London designers in a variety of ways for the five dissimilar members. “When I think of Tori, I think of Freddy Mercury from Queen or David Bowie’s Ziggy Stardust. When they were on stage, they gave you a bloody show,” says Binns. Santa will slip on dresses by La Petite Salope. “I was jealous, frankly, looking at those dresses. I thought, Why can’t I have that, but that’s not really what I push,” Amos adds.

Clyde will wear custom-made pieces by designer Avsh Alom Gur that complement her coloring. Isabel will mix vintage Amelia Earhart-meets-Lee Miller with customized pieces from Fishman, designed by Anna Fishman, a 24-year-old recent grad of the University of East London. Pip will continue with a variety of Unconditional dresses flaunting her rock edge. As for Amos herself, “I’m not flashing anybody on stage this year. I’m leaving that to the younger artists,” says the singer, opting for tailor-made beaded jumpsuits from Ashish by Ashish Gupta.

“Tori has been a great supporter of my work. She has been wearing my designs from when I first started my label,” says Gupta, who also works closely with Binns. Gupta, a fan since first hearing “Crucify” from Amos’ 1992 debut album, “Little Earthquakes,” notes, “Tori is strong, darkly beautiful and glittering. She is like a glam rock goddess.”

“These designers understand my body movement when I’m performing and they’re all building in movement that’s required for each girl,” explains Amos. “In my everyday life, what I cobble together to get into the studio is sometimes what just won’t rip in front of all these guys, and that’s just what hasn’t ripped so far.” Given Amos’ daily routine, she opts for stretch jeans mixed with pieces from Topshop. “Topshop is a great place to throw something on and pull it together, but, of course, I put it with a great shoe and vintage belt.” For each of Amos’ tours, she tends to focus on a few designers and stay with them throughout. “They become a part of my palette when I’m performing, no different than a painter.”