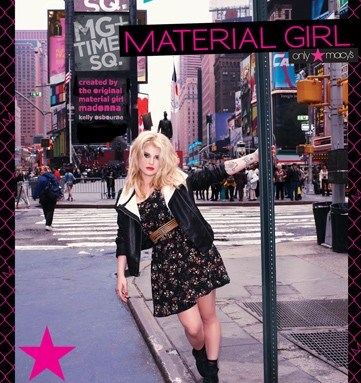 LIVING IN A MATERIAL WORLD: Kelly Osbourne was photographed at a series of iconic New York locales for the fall Material Girl campaign, which will break in September magazines.

Using the tag line “MG+NYC,” the campaign shows Osbourne in Times Square, SoHo, the West Village, Washington Square Park and at the Top of the Rock and was shot by Brooke Nipar. It is a follow-up to Osbourne’s spring campaign, which was photographed at two East Village dive bars.

“We have both enjoyed working with Kelly and are thrilled to have her on board for the launch of the fall 2011 collection,” said Madonna, whose Material Girl juniors line is a joint venture with Iconix Brand Group Inc. and carried exclusively at Macy’s. Her daughter, Lourdes Leon, helps design the collection and serves as a public face for it.

The fall media buy includes People StyleWatch, Nylon, Seventeen, Teen Vogue and Cosmopolitan, in addition to outdoor — including a Times Square billboard and the Macy’s Jumbotron in Herald Square — and online celebrity and fashion blogs like Cocoperez.com.

“Material Girl is so connected to New York, and we wanted to shoot in different locations that expressed the different sides of the Material Girl customer,” said Dari Marder, chief marketing officer at Iconix Brand Group.

Material Girl has been one of the best performing launches at Macy’s in the past year, said Martine Reardon, executive vice president of marketing and advertising at the department store. The line launched in 200 doors last August, expanded to 250 doors this past spring and will be in 300 doors this fall. “We have seen a new customer come into Macy’s for this collection, and the goal is to continue to grow it within our stores,” said Reardon.

PARIS COMMUNE: Stefano Pilati, who showed his cruise collection for Yves Saint Laurent in New York earlier this month, also made that American city the backdrop for YSL’s upcoming fall advertising. The designer had Inez van Lamsweerde and Vinoodh Matadin photograph model Raquel Zimmermann on the 31st floor of a building in Midtown, juxtaposing the French collection’s graphic lines with a backdrop of multicolored skyscrapers. The images are slated to break in August titles.