When it comes to fashion online, it might be better to think national rather than local. 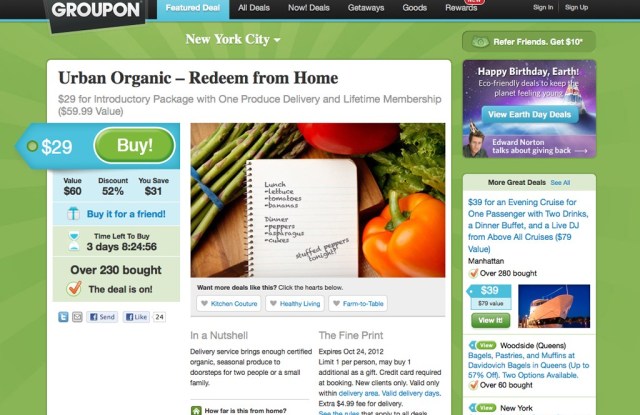 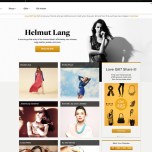 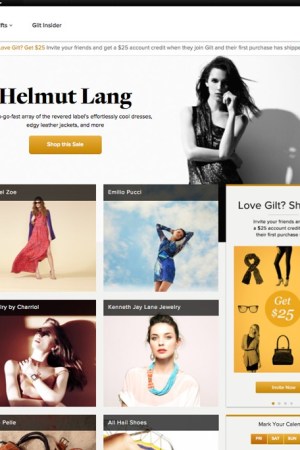 A view of Gilt's Web site.

When it comes to fashion online, it might be better to think national rather than local.

That appears to be the growing consensus among fashion brands and industry observers as the battle rages on between local-sale sites such as Groupon Inc. and flash-sale ones like Gilt. Right now, it appears the Gilt model is winning.

Groupon certainly is making more news of late — its stock hit an all-time low Thursday, closing at $11.76, a drop of 54.9 percent from its opening price of $26.11 when it went public Nov. 4. The decline follows news of multiple lawsuits over a larger-than-expected net loss last month, while additional factors — such as flaws in the model that fail to provide enough customer information to participating retailers — are leading many to question the fate of “daily deals” in the online arena.

Groupon pioneered the local deal phenomenon in the online space when it launched in 2008, and the company went public five months after its initial public offering filing in June. Ever since then, there has been backlash, controversy and speculation as to whether the brand should have gone public in the first place due to accounting practices that have raised a multitude of questions. But all the hubbub is unlikely to have any effect on the apparel industry, according to experts.

Sucharita Mulpuru, online and multichannel retail analyst at Forrester Research, said fashion isn’t a significant classification in the local-sale space because it’s challenging for brick-and-mortar retailers to generate a profit from this type of online deal — while the flash-sale model lends itself more to this category.

“I had a conversation with a mom-and-pop shop [recently], and they just don’t have the margins [to partake in a local deal]. It’s too rich of a cut that Groupon takes. From the get-go it’s a nonstarter. I certainly haven’t heard of anyone getting a tremendous amount of success from offering them,” Mulpuru said.

She explained that, if a retailer partners with a company such as Groupon, it is looking at a 50-50 split of an item at a 50 percent discount — and with margins that are “50 percent at best, it’s really hard to make that work, especially if you think of lifetime value and future customers. “

Mulpuru added that, for some of the bigger and more attractive retailers that work with Groupon, the Web site has been willing to compromise with a variable compensation structure.

According to a spokesperson from Groupon, deals on the local-sale site are roughly broken up into the following classifications: 30 percent food and restaurants; 30 percent spa; 30 percent activities and retail, and 10 percent miscellaneous. Any scan of Groupon will tell consumers that retail is a small percentage of the offerings. As a result, one could infer that retail accounts for less than 30 percent of the overall category — perhaps as little as 10 to 15 percent of overall deals.

The company disclosed larger retail brands that performed well include the Gap and Old Navy, with 5,000 and 100,000 deals purchased, respectively. On the more localized level are deals such as ones with boutiques in Englewood, N.J., and multiple locations of Ground Zero Clothing and Boardshop — with total deals listed as “over 1,000.” Groupon doesn’t reveal final totals of sales, so final units sold might be higher than numbers listed on the site.

At a panel presentation Tuesday at the Daily Deals Summit at the Crown Plaza Times Square in Manhattan on “Making the Deal Model Work,” panelists concluded that one of the top problems with daily deal sites is that customer information isn’t available to merchants, a critical component of any sale because it allows the small business owner to reconnect with the buyer. That’s not true of flash-sale sites where the merchant has the e-mail and shipping information of the customer.

There are other flaws in the daily deal model that are not inherent in the flash-sale model.

Marc Caltabiano, vice president of products and marketing at Cartera Commerce, noted that an inherent flaw in the daily deal model is the reliance on a voucher, which essentially operates on a “hands-off relationship” basis.

For Mo Yehia, co-founder of daily deal site API Sqoot, the deal model works primarily where there is power in the local community. “Eighty percent of the discounts are spent [near where] you live, or in Manhattan within 10 blocks,” said Yehia.

With respect to flash-sale sites such as Gilt Groupe, however, Mulpuru has found that brands and manufacturers — versus a retailer, for example — will reap the most benefits. This is because merchandise can come directly from where it’s sourced, and there is often a large amount of product or overstock readily available, which isn’t always the case for a retailer or independent, neighborhood boutique, where a local deal might be the only viable sale option.

“Even if something is 50 percent off, the manufacturer is still making some money because they are part of the value chain where there is the greatest margin to start with. There is a huge markup that manufacturers charge the retailers, and then the retailer usually doubles the price,” Mulpuru said.

For example, if a pair of jeans retails for $200, this means it probably costs less than $50 to make — so if the manufacturer charges anything more than $50 it will still turn a profit, even if the consumer is able to snag a pair at nearly 75 percent off. Mulpuru said this is a great deal for Gilt, and flash-sale sites have the ability to “liquidate with a sense or urgency to affluent customers who like brands — if there is that much leftover merchandise to sell.”

Jyothi Rao, Gilt Groupe’s general manager, women’s, contends that although the company has seen success in the apparel category both with its original flash-sale format and local-sale counterpart Gilt City, the fashion business is “far greater” on Gilt Groupe.

“Gilt City’s focus is primarily on experiences and services, and ours tend to be more focused on product and that’s generally how we position our business. I know when they’ve sold certificates for apparel products, they have had success with them, and we work in concert with each other. We have some strong partnerships with brands and we generally go in together and strategize what will make the most sense,” Rao said.

She cited Theory’s upcoming sample sale as illustrating this notion. Gilt City will offer tickets for early access to the physical sale in New York City and Gilt Groupe will run a digital, flash version of the sale.

“In terms of city and more local deals, I think it [Gilt City] lends itself more to a more considered purchase, if you can imagine that in our space. It allows members to have more time to make the decision on whatever they’re buying, even if it’s a certificate,” Rao said, noting that with Gilt City deals, the discounts aren’t as deep (as they are on Gilt Groupe) and certificates are nonrefundable.

Flash sales are a “much more immediate gratification business” for Rao, who believes the reason this model works so well for appeal is due to a heightened sense of urgency and a competitive element, “which a lot of women really enjoy.”