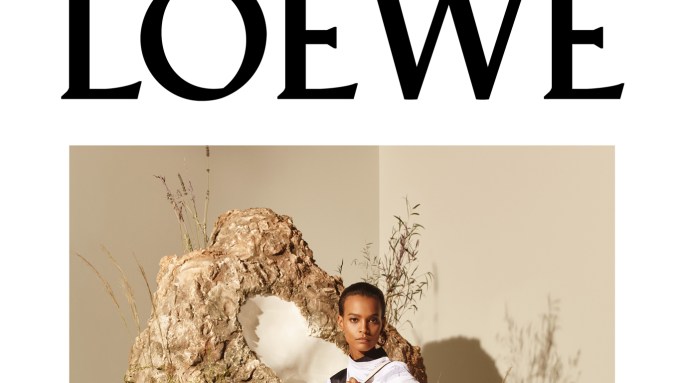 HEAD START: Jonathan Anderson is slated to unveil a look from his fall 2016 collection for Loewe on Thursday — the day before its official unveiling during Paris Fashion Week — by plastering Paris kiosks with the look worn by Liya Kebede and captured by Steven Meisel.

She poses in front of a sculpture combining rocklike formations with white iridescent sections, that also served for a men’s fall 2016 campaign visual revealed in January.

Anderson has been giving the public a preview since his first collection for the Spanish luxury house, owned by LVMH Moët Hennessy Louis Vuitton, for spring 2015. The latest image also reflects the input of stylist Benjamin Bruno and art direction from the M/M Paris agency.

Two other images of the campaign are to appear on kiosks across Paris: an exclusive black-and-white work by Steven Meisel from the photographer’s personal archives as well as an image featuring a hand-painted leather necklace that will be part of the fall’s show Friday. The three visuals will be on view in Paris through the end of collections week on March 9.

As in the previous seasons, the campaign look and selected runway exits will be available for preorder on the brand’s Web site immediately after the show.