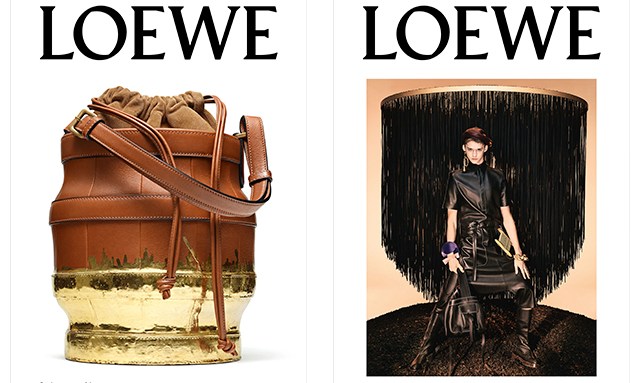 FUTURE VISION: Jonathan Anderson has seen the future, and it is gender fluid.

Loewe’s creative director has cast androgynous model Max Overshiner in his fall men’s advertising campaign, set to break across more than 500 news kiosks in Paris during Men’s Fashion Week from Jan. 19 to 25.

The Spanish luxury house is again providing an early look at the campaign, but unlike previous seasons, the three images — in line with Anderson’s concept of Past, Present, Future — will go up on the same day as it is holding showroom appointments for the collection, instead of the day before.

Overshiner, dressed in a black leather shirt and cropped cargo pants, represents the future. The model, wearing an oversize gold brass earring and chunky bracelets, was photographed by Steven Meisel in front of a suspended structure made by the M/M Paris agency from more than 9,000 coal-colored silk ribbons.

An image of the brand’s new bucket-shaped Lantern bag in tan calf leather stands for the present. The bag, which looks like it has been dipped in gold silicone paint, will go on sale immediately in stores and online.

The past is represented by a still life titled “Flowers (November)” taken from a series of 12 color photographs by Meisel inspired by British floral decorator Constance Spry. They are available in a limited-edition calendar available in select Loewe stores and online.

As in previous seasons, the selected images will go up on a billboard outside of Loewe’s atelier on Rue Bonaparte, opposite Saint-Sulpice cathedral.