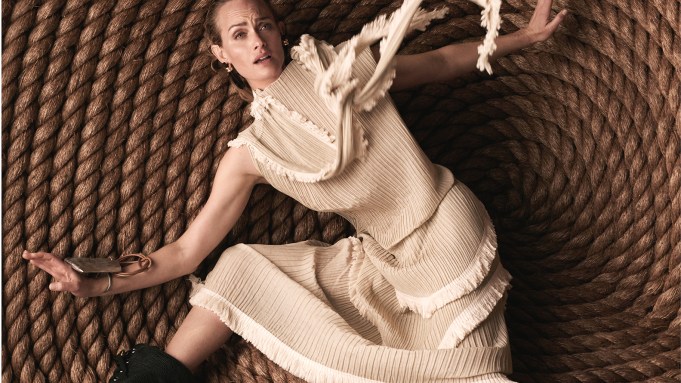 KIOSK PREVIEW: Hundreds of Paris kiosks are to reveal an outfit and handbag from Loewe’s spring collection one day ahead of its runway show on Friday.

Creative director Jonathan Anderson collaborated with Steven Meisel on the campaign, which features Amber Valletta in a pleated dress with a swirl of seaweedlike ruffles, and a pack shot of the Spanish brand’s new Joyce bag.

A third image simply features a flower arrangement in a vintage vase, telegraphing Anderson’s interest in craft and depicting Loewe in a lifestyle context.

Four looks from the spring show can be preordered online, according to Loewe, which will also display the image on scrolling billboards outside its Place Saint-Sulpice atelier.

The crescent-shaped Joyce bag is to be available immediately after the show on Loewe’s web site and at select stores.

Anderson has been giving the public a preview — and collaborated with Meisel — since his first collection in September 2014 for the Spanish luxury house, which is owned by LVMH Moët Hennessy Louis Vuitton.