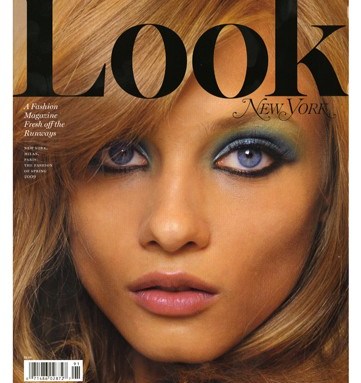 LOOKING AWAY: As fashion brands continue to pull back their ad spending, it leaves fewer dollars on the table to divvy up across a plethora of magazines. And the result is another victim of the downturn: New York Look, the biannual spin-off from New York magazine dedicated to covering show seasons in New York, Paris and Milan. There definitely won’t be a spring issue this year — and a fall one is questionable. A spokeswoman for New York magazine said coverage of the fall 2009 shows, which begin Feb. 13 in Manhattan, will appear in New York’s Fall Fashion issue and include some elements of Look. She added the company “will revisit the publishing of the stand-alone Look in the fall of 2009.” Look was produced by New York’s fashion team and a handful of freelancers and was distributed on newsstands and to a select group of New York subscribers after the Europe shows ended each season.

NASTIA’S TWIRL: Olympic gold medalist Nastia Liukin is taking her gymnastic moves from the floor exercise into Max Azria’s spring campaign, which will debut online later this month. This is Liukin’s first fashion campaign and also represents the first time the brand has shot a well-known personality; model Tasha Tilberg appeared in the fall campaign. “For the Max Azria campaign, we wanted someone iconic — someone timeless. We met Nastia at our last runway show, and she was everything we were looking for,” said Lubov Azria, creative director of Max Azria. “The spring collection was inspired by movement and modern dance so she was perfect. It was meant to be, and the magic just sort of happened.” There are no plans to run the campaign in magazines, said a spokesman, who added the budget this season is flat compared with the fall campaign.

GREAT SCOTS: John Varvatos’ spring ad campaign features Franz Ferdinand, the Glasgow-based rock band, in a gesture toward the designer’s international ambitions. The band’s third album, “Tonight: Franz Ferdinand,” is due out this month. Photographer Danny Clinch shot lead singer Alex Kapranos, Nick McCarthy, Paul Thompson and Bob Hardy in slim-fitting suits, with a vintage Mister Softee ice cream truck parked in Harlem. The shoot was inspired by Kapranos’ infatuation with classic Americana and by New York street photographs from the Forties through the Seventies, said Stephen Niedzwiecki of creative agency Yard. Varvatos always features rockers in his Collection ads. Perry Farrell of Jane’s Addiction was in the previous campaign. Franz Ferdinand, Varvatos said, was “the perfect choice to express the sleeker, mod-inspired edge of my spring collection.” Varvatos’ fall runway show will take place in Milan this month, having relocated from New York in pursuit of more international exposure.