Looking for a City Map

NEW YORK — In the beginning, there was Clay Felker’s New York magazine. And it was good.

So good that in the 38 years since, its descendants have prospered by simply breaking off pieces of either its editorial franchise or its... 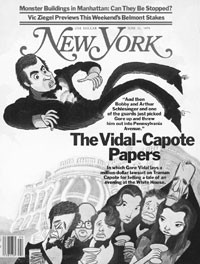 NEW YORK — In the beginning, there was Clay Felker’s New York magazine. And it was good.

So good that in the 38 years since, its descendants have prospered by simply breaking off pieces of either its editorial franchise or its readership and claiming they invented them. Today, Time Out New York dominates listings, and Hamptons and Gotham enjoy a business built on party photos (and the rich readers who pose for them — a virtuous circle). Even The New York Times and The Wall Street Journal have horned in on every city magazine’s service journalism with their multiplying sections like “Escapes” and “Personal Journal.”

But New York itself, which invented it all, is at a crossroads. Finally freed from Primedia thanks to Bruce Wasserstein’s $55 million bid and his deputy, new chief executive Anup Bagaria, New York at last is being given the resources to rebuild its circulation, add staff and hunt bigger game in the feature well.

Editor Caroline Miller and publisher Larry Burstein appear to be sticking around, and while Bagaria is coy about the changes that are coming, he and Wasserstein are convinced there’s still room to grow. Two long-term goals, he said, are raising the total circulation — both newsstand and subscription — by as much as 25 percent, or more than 100,000 copies (circulation was 442,000 in the first six months of 2003), and raising the readers’ median household income from $129,000 per year to as high as $150,000.

And Miller faces an odd, enviable dilemma — since she now has the guns and the mandate to conceivably hunt any story she wants, where should she aim first? “I think we might only be now seeing what Caroline can do as an editor,” said one of her peers.

First up is fashion. On Thursday, New York hired Harriet Mays Powell, former fashion director of Tatler in the U.K., to replace Mark Holgate who had left for Vogue. “That’s the thing we’re going to focus on immediately,” she said. “We’re about to hire a new fashion director and plan to really develop our fashion profile in a very ambitious way.”

And after that? More business stories? More political coverage? Sure, sure, Miller said — all of the above and more.

The owners and editors of nearly every other city magazine in the U.S. are watching closely, since they either bid, pondered bidding or gossiped endlessly about New York when it was up for sale. Many had grand plans for the title once they got their hands on it; others were happy to discourse at length about why they would never want it. So WWD asked where their own properties were headed — how are city magazines evolving to face the threat posed by the Internet (a near-perfect medium for listings), newspapers, new competitors, etc.? Once the usual hype is filtered out, a few themes remain, like:

With the notable exception of Time Out New York, post-Felker city titles have unbashedly served affluent readers and the advertisers who target them. Whether Jason Binn’s chain of luxe regional glossies like Hamptons and Gotham, society alumni magazines like Quest or Avenue, or even the Times and the Journal, the goal has been to boost readers’ median income and improve the pedigree of the advertising. The editors of general interest city titles like Los Angeles, Chicago and Boston are torn between sticking to the business plan and keeping, ahem, less affluent readers engaged.

“I think this is the great challenge for editors,” said Los Angeles magazine editor Kit Rachlis. “City magazines as an ad vehicle promise to deliver the high-end readers that newspapers, with the exception of The New York Times, can only offer partially. But to be truly successful, the entire city must be their subject. They cannot be narrow.”

Tell that to Binn, who boasted a 30 percent increase in pages and revenues at his magazines last year, or Quest’s Chris Meigher, who said pages rose 16 percent on the strength of real estate and jewelry advertising. Next month, Los Angeles will post its best annual results in the last decade. At New York, Burstein said the plan is to focus on the fashion, automotive and retail banking categories; it finished the second half of 2003 up 6 percent.

As much as newsstand sales are declining across the industry (due to wholesaler consolidation and other factors), city magazines in particular have had to come to terms with low sales. Time Out New York, for example, launched in 1995 with a newsstand-centric strategy but quickly changed course. The newsstand accounted for just 13 percent of the magazine’s 127,555 total circulation in the first half of last year. This fall’s Time Out Chicago will follow a similar strategy. “The way the whole business is going, is that if you have a weekly, you want it to come automatically,” said TONY president/editor Cyndi Stivers. “You want them to commit to having it 51 times a year. You do keep track of what happens on the newsstand, but it’s vulnerable to so many things.”

Los Angeles’ Rachlis guesses the best ratio of single-copy sales to subscriptions hovers at around 15 to 20 percent, but even that seems high. New York sold around 5 percent of its copies on the newsstand in the first half of last year, and luxury glossies like Gotham and Hamptons are mostly controlled circulation. Binn would rather ensure that copies of his titles are on the coffee tables at Michael’s and The Four Seasons than throw money away on direct mail.

“Newsstands are really inefficient and increasingly unimportant and expensive,” said Clay Felker, now a professor at the University of California at Berkeley. “Newsstand is not the answer. The answer is to provide a product to people affluent enough and intelligent enough to pay for it.”

If New York’s competitors “ever decide to do actual journalism, then maybe they’d succeed,” said Steve Brill, who ran a city magazine (Manhattan Lawyer) into the ground in his day. “They’re all doing anything but magazine journalism.”

Needless to say, the editor of every niche magazine claims otherwise. Time Out’s Stivers describes her magazine’s listings as “really a showcase” for her writers, for example. “Their voice really rings through,” she said.

But Felker’s original prescription for New York —“that it’s aimed at the movers and shakers” — is still embraced by more nostalgic editors as the ultimate equalizer. “If New York were the editorial engine it was when Clay had it, advertisers would feel they had to be in that magazine,” said Brill. “Citarella would have to be in that magazine just to show the flag.”

Ultimately, asserted one editor, advertisers don’t care what a city magazine’s service-to-features mix is, what the demographics are or whether newsstand sales are strong. “They want a provocative magazine,” the editor said. “The pitch is that the magazine is about what’s on readers’ minds, and that their minds set the agenda. That’s the real value.”