Director Kimberly Peirce returns with a love letter to the boys overseas. 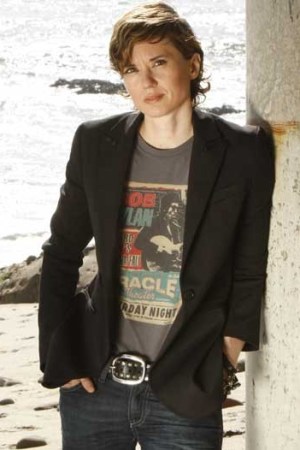 The 40-year-old director first hit the scene nine years ago with her debut Boys Don’t Cry, the true story of the life and death of transgender teen Brandon Teena, which won Hilary Swank her first Academy Award. But while one might have expected Peirce to follow that with a string of movies—indies or blockbusters—that hasn’t been the case. First, several projects fell through but, more important, Peirce isn’t one to do something unless it’s on her own terms, as evidenced by her choice of subject matter for her second film, Stop-Loss, about the so-called “back-door draft” by which the government can extend soldiers’ contracts involuntarily. The movie, out March 28, covers a topic that hasn’t exactly had audiences rushing to theaters to grapple with. Last year, a spate of major Iraq-centric films, including Lions for Lambs, Rendition and In the Valley of Elah, all stalled at the box office. But this film, an MTV production, might bring in a different crowd with an Us Weekly-friendly cast of Ryan Phillippe, Channing Tatum, Joseph Gordon-Levitt and Abbie Cornish.

Peirce doesn’t seem to have any worries about what mainstream audiences might want.

“I make movies about things that scare me and confuse me,” the director says. “I’m interested in masculinity and violence.”

One of the few well-known female directors working in feature films, Peirce became an overnight sensation with the release of Boys Don’t Cry. “I woke up and I had a Hollywood career,” she says.

It turned out to be more difficult than Peirce might have anticipated to make another movie. Two “housekeeping deals” at New Line came and went and she still hadn’t turned out more than an L-Word TV episode. A major film deal with DreamWorks collapsed because of a battle over budgets: Silent Star, a massive period piece about the murder of silent film director William Desmond Taylor in 1922. It was to have starred Hugh Jackman, Evan Rachel Wood, Ben Kingsley and Annette Bening. “It was a big loss of time and energy for me,” admits Peirce. “I loved that project, and the best thing I could do with my frustration was do something else. Literally the next day I jumped on a plane and was interviewing people [for Stop-Loss].”

This project has highly personal origins: Not only did Peirce witness the World Trade Center attacks from the windows of her apartment on the Bowery, but soon after, her younger half-brother enlisted in the military and completed two tours of duty in Afghanistan and Iraq.

“Suddenly, we became a military family,” says Peirce. “This person that I love, my brother who I brought home from the hospital, was going to fight.” Peirce, who moved west to a Malibu beach house in 2003, sent e-mails and instant messages to her brother while he was overseas.“He would go on a mission and then come back to base and [instant messsage] me,” she remembers. “I would say, ‘What’s up with you?’ And he would answer, ‘Same old.’ And I was thinking, ‘What do you mean, “Same old?” You are in Iraq!’”

Such continuous contact made Peirce interested in the general mind-set of American soldiers, and she started doing research with the idea of making a documentary. Traveling among New York, Los Angeles and the military town of Paris, Ill. (home of the 1544th Army National Guard Unit), along the way she interviewed military men, as well as their wives and families. She also discovered the phenomenon of home movies shot by soldiers overseas by strapping small cameras to sandbags, Humvees and gun turrets. They intercut the sometimes shocking videos, which are complete with fake Hollywood credits, with images from the Internet and set them to music such as Toby Keith, Rage Against the Machine and Prodigy.

“It was an amazing anthropological find,” says Peirce. “They are making themselves the stars of these movies. It was a look inside the thoughts and feelings of a young man going through this.”

After declining an offer of funding from Davis Guggenheim’s socially conscious film company, Participant Productions, she decided to transform her research into a feature film following Phillippe’s character, Staff Sgt. Brandon King, as he travels cross-country struggling with the ramifications of being “stop-lossed.”

Getting financing and a green light from Paramount, MTV’s parent company, was only the first hurdle: The complex plot needed to be reworked and required multiple reshoots, which eventually pushed the budget close to $30 million. The movie also got caught in a tabloid maelstrom when Phillippe and his wife, Reese Witherspoon, divorced amid rumors that he had an affair with his co-star, Cornish.

And since Peirce’s second movie took nine years to come to fruition, it’s perhaps not a surprise that she claims not to be worried about what the box-office results of this film might do to her Hollywood career: “I wanted to get this movie right for the soldiers,” she says. “I wanted to tell it from their point of view, and I wanted them to like it. I love these guys.”