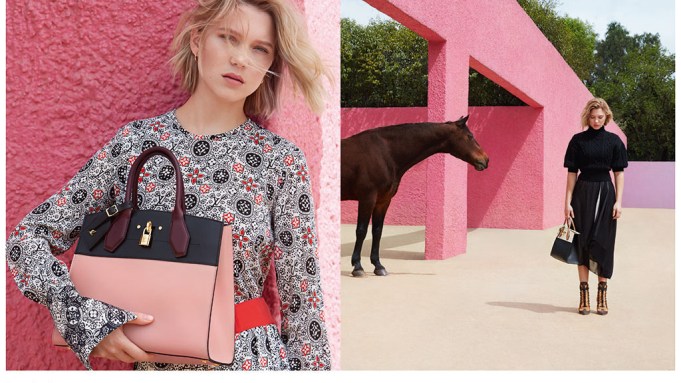 RANCH DRESSING: Consider it a warm-up for the Cannes Film Festival. Léa Seydoux plays a “daring, confident heroine who is constantly on the move” in her first campaign for Louis Vuitton.

Slated to break in Vanity Fair U.K. on Friday and then roll out in other June and July magazines worldwide, the ads picture the “Spectre” actress at the colorful, modernist ranch Cuadra San Cristóbal by celebrated Mexican architect Luis Barragán.

Considered one of Vuitton’s “travel” campaigns, the ad shows Seydoux with windblown hair cradling Capucines and City Steamer handbags. Occasionally, a horse peers out behind her from one of the compound’s vivid pink stucco walls.

The actress wears clothes from the pre-fall collection in ads styled by Marie-Amélie Sauvé and photographed by Patrick Demarchelier. Paul Hanlon styled hair while Hannah Murray did the makeup.

Paris-born Seydoux recently joined Alicia Vikander, Michelle Williams, Jennifer Connelly and Doona Bae as an ambassador for Vuitton and made her first appearance for the brand last January at the UNICEF Ball in Los Angeles.

Seydoux scooped up a Palme d’Or at the Cannes Film Festival in 2013 for her role in “Blue is the Warmest Color” and has appeared in such diverse films as “Inglourious Basterds,” “Midnight in Paris,” “The Grand Budapest Hotel” and “Mission: Impossible — Ghost Protocol.”

At Cannes next month, Seydoux is to appear in Xavier Dolan’s “It’s Only the End of the World,” one of 21 films in competition. The cast also includes Marion Cotillard, Nathalie Baye, Vincent Cassel and Gaspard Ulliel.