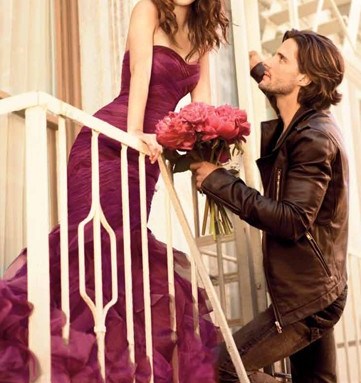 Meester appears in print advertising and a TV commercial for the fragrance; both were previewed to editors from around the globe at the event, as was the bottle and its flower-and-tulle-festooned cap. Print ads are slated to begin running in September fashion, beauty and lifestyle magazines in the U.S. The scent is out June 5 at Harrods in the U.K., and will be launched in the U.S. in August. TV is expected for holiday. Carter Smith shot the ads, with Trey Laird serving as creative director.

In both ads, Meester is clad in a maroon couture Wang gown and looks carefree, but Wang insists that was Meester’s acting chops at work: “Everyone else was in three parkas and Leighton is standing there in a strapless evening dress with a very thin fabric,” said Wang, noting that the ad was shot on a particularly frigid winter day on Mercer Street in SoHo. Naturally, this caught the attention of every tourist with an iPhone — but while Wang wasn’t wild about unauthorized visuals floating about, she did appreciate the spontaneous market research. “When I heard tourists saying, ‘ I want to look like her,’ I knew we were right on the money,” said Wang. “There’s nothing like the real client in the street, and I mean the street literally — and in windows literally.”

Meester took it in stride: “I was above it all, literally,” she said with a laugh of her fourth-floor perch on the fire escape where the ad was shot. “So I was just kind of entertaining myself — I did a little singing, did a little dance.”

HONORING HAMISH: Before accepting the Fashion Icon Award from Pratt Institute on Wednesday evening in Chelsea, Vogue European editor at large Hamish Bowles greeted guests over champagne in a curtained-off room at the back of the Metropolitan Pavilion. “I’m profoundly flattered,” he said. “Part of me thinks it’s a sign of extreme old age that I’m suddenly being considered for honors.” He joins the company of past winners: Catherine Malandrino, Ralph Rucci, Carmen Marc Valvo, Narciso Rodriguez and Diane von Furstenberg, who came to introduce Hamish during the presentation.

Bowles is the first editor to win the award. “I’ve just sort of bumbled along having a nice time — sometimes an unnerving time — but never a dull moment,” Bowles said of his 20 years at Vogue and six years at Harpers & Queen in the U.K., where he went to work after art school. “It’s fun to look back and think, maybe there is some body of work to look back on.”

Asked if he made anything of the recent departures of style director Alexandra Kotur and contributing fashion editor Edward Enninful from the magazine, Bowles tread lightly. “I think that that was just such a great opportunity for Alexandra,” he said. “To be back with Jay [Fielden] I think is an exciting challenge and one that she can certainly rise to. And I think clearly she understands the world of Town & Country very much.” A Pratt publicist snatched him away to take photos.

“I think moments of flux are kind of exciting, to be honest,” Bowles added later. “I think we’ve had a status quo for a certain amount of time, and I think it’s actually been really nice that it’s been so unbalanced in a way. I should just say hello to Anna, sorry.” He darted away again to take photos with Anna Wintour, who was just arriving.

Later von Furstenburg presented Bowles with the award on stage. “Hamish is a true renaissance man — he can do just about anything,” she said, listing Bowles’ latest stunts for Vogue, including playing basketball with Amar’e Stoudemire. “I always tell Hamish that, to me, he’s a closet butch,” she added.

Accepting the award, Bowles thanked his parents and recalled his days at St. Martins with, among other classmates, “the protean John Galliano.” When it came time to thank Wintour, he took a half step back from the podium and sounded slightly choked up, with his arms crossed. “It’s almost impossible for me to imagine that it was almost 20 years ago that I first set trembling foot at American Vogue,” he said.

“Thank you, Anna,” he added, “for the gift that keeps on giving.”

HAIR APPARENT: While hosting his annual Tribeca Film Festival party on top of the steps at the State Supreme Courthouse in downtown Manhattan, Graydon Carter laughed when asked if he’d watched Barack Obama’s birth certificate press conference early that day. “I have a day job, you know,” he said. OK — well, any thoughts on Donald Trump, a longtime subject of fodder for Carter and the man who basically forced the president to get on national TV and talk about his birth place? “Here’s what I want to see: I want a certificate proving that Donald Trump’s hair is real. Does he have that?”

Across the room, among passed trays of foie gras from Per Se that were largely ignored by guests including Robert De Niro, Brian Grazer, Rupert Murdoch and Martha Stewart, Allure’s Linda Wells walked into the party with the actress Carey Lowell, known to some as playing a former district attorney on “Law & Order,” and to others, as Richard Gere’s wife. As conversation turned to the royal wedding, Wells, in Alberta Ferretti, admitted zero interest in waking up early to catch all the pomp and circumstance. “I might live to regret it but they will replay it over and over anyway.” Diane von Furstenberg was on the same page. “It really just depends if I wake up. But I will TiVo it for sure.”

EARLY SEPTEMBER: Now is the time to start fattening up for September. Cue lobster lunch for Glamour magazine advertisers at The Modern, Danny Meyer’s on 53rd Street, on Thursday afternoon. Editor in chief Cindi Leive and group publishing director Bill Wackermann’s big pitch this year to buyers revolved around Glamour’s use of social media in their September “Friends” issue.

“We’re uniting what we think are the biggest G-rated passion points of young women: fashion, friends and Facebook,” said Leive, who crowed about her Tumblr and Twitter-savvy staff. Their tweets and blog posts are voicier than the competition, she said, reading aloud a tweet from InStyle’s feed “The latest star to get a major hair makeover is.…”

“Who do you want to read when you’re waiting on line at Starbucks?” asked Leive. “What’s Tumblr?” whispered one media buyer to her assistant.

Glamour collaborated with SpyderLynk, a mobile marketing firm, to develop an iPhone that will allow readers to scan a Facebook icon that appears in editorial and advertising content in the September issue. Scanning the tag will take readers to a screen on their iPhones that will allow them to Like different brands and editorial features.

It may be a stretch to ask readers to go through the trouble to learn and install new technology on their phones so they can update their tastes on Facebook and read the issue simultaneously. But it’s worth a shot. The New Yorker’s recent experiment with incentivized Facebook-Liking was a success. The magazine added more than 17,000 Facebook fans by asking readers to Like David Franzen’s story about David Foster Wallace before they could read it online.

Turning those fans into consumers is another hurdle. “It’s not just the Friends issue — it’s the friends with benefits issue,” said Wackermann, when it was his turn to speak. “And anyone knows a friend with benefits is good…so I hear.”

“We’re all sitting in this room saying I want to build my Likes and how do I actually make that make money for me? We need to close the loop and finally figure out how this can actually drive sales,” Wackermann continued. “This is the opportunity to do that.”

Glamour tried a similar digital tie-in last September, offering advertisers the chance to buy ads in the iPad edition and in print as a package. The issue was up 57 percent in ad pages over September 2009. This September, scannable Facebook tags will be limited to 20 advertisers in the issue and also appear on the magazine’s cover.