This fall’s Denim Democracy campaign features the gap-toothed beauty surrounded by an assortment of all-American posers. 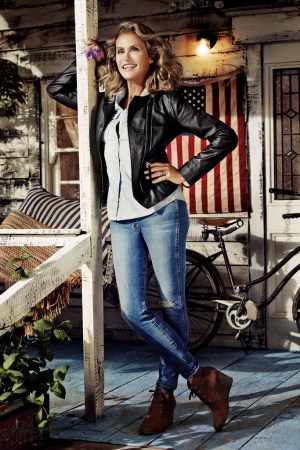 LUCKY ELECTS HUTTON: Lauren Hutton’s long-forgotten Penthouse photos resurfaced last week nearly 50 years after they were taken, but Lucky Brand execs were more fired up about her modeling for the label. This fall’s Denim Democracy campaign features the gap-toothed beauty surrounded by an assortment of all-American posers. Shot at Milk Studios in Los Angeles, the ragtag family of eight was photographed on what looked like the front porch of a weather-beaten country house.

Ever the trained-and-tested pro, Hutton was all about the fit of the clothes, said executive vice president and creative director Patrick Wade. Truth be told, few other women who are pushing 70 could pull off skinny jeans and a bomber jacket. In between takes, Hutton played the matriarch role to a T, joking with photographer Giampaolo Sgura and prodding the pint-size models to smile. Wade said, “We do shoots all the time with models, but Lauren really made the day. She brought so much energy to the set.” (She also brought her own makeup and took care of every last brush stroke herself.)

The images and video will appear in fall ads, on Lucky Brand’s Web site and in its August catalogue, which ships to 500,000 shoppers. The brand hopes to recruit Hutton for its Santa Monica and Beverly Hills store openings this fall. “We love her and would love for her to be part of that,” Wade said.

The denim label is also keen to reenlist models Missy Rayder and David Gandy for a third season. When the pair headlined Lucky’s 64-page catalogue last summer, it was the most successful one to date, Wade said. On another front, Lucky is a sponsor of season six of PBS’ “Live From the Artists Den.” A recent blog post described Imagine Dragons’ 90-minute taping, including such postshow info as the fact that the Moscow Mule was the drink of choice and a Lucky-designed Imagine Dragon T-shirts was the swag. Mumford & Sons, Soundgarden, The Killers, The National and Ed Sheeran are also on tap this summer for the public television program.