With styling from Vanity Fair’s Jessica Diehl, he shot portraits and fashion for a good three days for the 150-page portfolio.

By Rosemary Feitelberg on May 29, 2013
View Slideshow 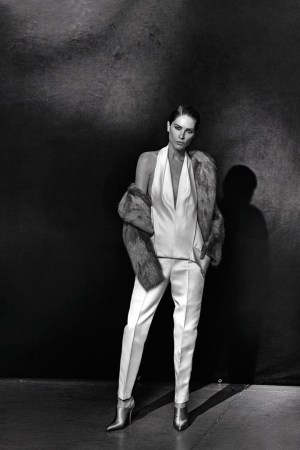 LUCKY LINDY: Peter Lindbergh has always been at the top of Trey Laird’s wish list for the Council of Fashion Designers of America journal, and this year the art director lined up the photographer early enough to make that a reality.

Having done numerous DKNY campaigns in the Nineties, Laird said Lindbergh was one of the first photographers he ever worked with in New York and he has always thought of him as “a fashion father” of sorts. And apparently Marc Jacobs, Jack McCollough, Lazaro Hernandez, Thom Browne, Alexander Wang, Phillip Lim and the other 2013 award-winning designers were just as pleased to be on the set with him.

The Proenza Schouler duo told Lindbergh how they hung his photographs of supermodels on their walls in college, according to Laird. No worse for the wear, the design duo was shot the morning after the Met Ball. “I left the Boom Boom Room at three something, and Jack and Lazaro were still there. They were our first victims the next day,” Laird said.

With styling from Vanity Fair’s Jessica Diehl, Lindbergh photographed portraits and fashion for a good three days for the 150-page portfolio — 50 pages more than last year’s version. (Max Berlinger penned the copy). There are “little stories” for each collection thanks to a lineup of models like Ruby Jean Wilson, Sasha Pivovarova, Erin Wasson and Kristen McMenamy, whose first shoot was with Lindbergh.

And their latest collaboration went beyond the shoot. When Lindbergh told her they must do another one soon, the model suggested an impromptu nude. “So everyone left the set. In two seconds, the full-on, head-to-toe Givenchy she was wearing dropped to the floor and she was in her birthday suit,” Laird said. “I kept hoping, ‘Please don’t let Mr. de la Renta walk in now.’”