Ban Ki-moon appears on the cover of the magazine. 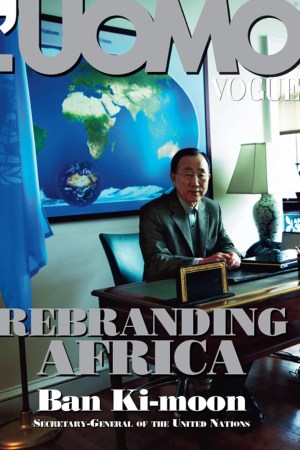 “Africa does not need charity,” states Ki-moon in an eight-page photo spread and interview conducted by Franca Sozzani, the magazine’s editor in chief. “Africa needs investment and partnership. Joining forces with civil society and private sector, including non-traditional players, like the fashion industry, has become indispensable.”

Sozzani sang Africa’s praises, noting that presidents and first ladies, artists, musicians, actors, designers, writers and models from the continent had all enthusiastically agreed to be photographed for the issue, “specifically because presenting a positive image of this continent means bringing the world’s attention to a reality that had until now been ‘excluded,’ with the exception of some countries that developed thanks to tourism. But every African nation has enormous potential.”