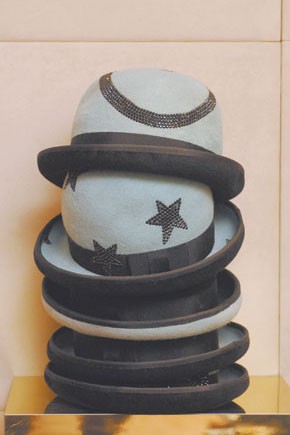 Bring on the cheeky irreverence. Meet two designers — one new, another a veteran — who are punching up their accessories with finger-wave hats, burlesque headdresses, drunken pearls and Day-Glo neckwear.

During the recent Paris collections, there was something decidedly different about the merch at Maria Luisa’s accessories boutique: wickedly wild hats, and plenty of them. In the display window, for instance, was a flamboyant Las Vegas-type headdress, complete with jet-black beading and oversize ostrich feathers sprouting from the back. On the counters, scattered among the tony Manolo Blahnik heels, sat pleated tulle headgear and a tiny hat in the shape of an elongated apostrophe. Occasionally that week at the Rue du Mont-Thabor shop, you also may have spotted a mustachioed man — pointy Dali-style whiskers, no less — with a gold tooth, some serious tattoos and weighted tribal earrings that dragged down his lobes.

Meet milliner Justin Smith and his debut collection, J Smith Esquire, which garnered top honors at this year’s International Talent Support competition in Trieste, Italy. Smith won the i-D Styling Award, earning him an eight-page spread in the magazine, as well as the Maria Luisa Award, hence the placement at the store during fashion week.

But even before he graduated from London’s Royal College of Art in June, Smith had started to attract attention. In 2006, London’s The Hat Magazine dubbed him “Hat Designer of the Year,” the judging headed up by none other than Stephen Jones.

Originally from Exeter, England, Smith discovered millinery by way of the culinary world. With ambitions of becoming a chef, he started working for a local bakery when he was 16. “I would do a lot of wedding and birthday cakes,” recalls Smith. “But after a couple of years, I decided it wasn’t creative enough.” So he switched to hairdressing and, at 18, moved to London to work for Toni & Guy. An odd leap of profession? Not at all, says Smith. “It’s sculpture, the idea of shape,” he explains. “I used to make all the icing patterns on the cakes.”

He spent the next five years working his way up at Toni & Guy, eventually becoming its creative director and head of the avant-garde department. In 2003, he opened And People Like Us, his own salon located in London’s Soho district. “That’s where the hats really started from,” he says. “I had taken a hat class to help me with the avant-garde hair, and when I left Toni & Guy, I had no reason to do that [experimental] stuff anymore. So I did hats.”

His designs sometimes betray his salon experience. That “apostrophe” number made from hand-knit metals beads, for example, is modeled after a Twenties finger wave. Still, for all the recognition he’s receiving for J Smith Esquire, Smith has no plans to abandon hairstyling; he still works at his salon three days a week.

“Tradition with a twist” is how the designer describes his launch collection. While the phrase certainly fits, it also underplays just how subversive and witty his work really is. If Fellini had launched a hat line, it would have looked a lot like this. To wit, there’s one topper made of eight martial art fans bundled together — two of them are removable. Those ostrich feathers in that showgirl headdress do the same. “I wanted it to be about hats-as-performance rather than just a hat,” Smith says, noting that he found his inspiration in Victorian circuses. To that end, he enlisted a number of carnival characters, à la John Galliano, spring 2006, to wear his designs for the MA presentation in May. A dwarf and a giant wore matching brushed silk top hats, except one was 3 feet high and the other, squashed down to 6 centimeters. “The idea was that, if they wore the hats, they would both be the same height,” Smith explains. The rest of the designer’s headgear ranged from a stack of bowlers — which were juggled onstage — to transparent pigskin hats embellished with tattoo imagery. Smith’s own tattoo artist painted and wore the latter, with a matching pigskin bustier. “She was next to naked,” Smith says, “so her real tattoos showed through.”

But not all his designs are so over-the-top. Smith does bespoke work, too, and recently created a pair of delicate lily-shaped hats for a client. Her request: something to match her hand-sequined, paisley-print Dries Van Noten coat. This January, Smith plans to launch both a ready-to-wear collection under the J Smith Esquire label and a diffusion line called Mister Smith. “They’ll be much more wearable, with Mister Smith being more street, slightly bolder and stronger in color,” Smith says. J Smith Esquire retails from $1,250 to $13,500; prices for the ready-to-wear and Mister Smith have yet to be determined.

“Each hat has a character,” Smith says. “It’s a complete mixture of different things — like me. I’m a real traditionalist and a bit of a dandy, but I’ve also got the funny ears and the big tattoos.”

Puttin’ on the Glitz

As anybody who has met him knows, Tom Binns is not one to mince words. On this particular day, the Belfast, Northern Ireland, native is furiously firing off a few choice expressions to describe a new design. “I call this the f-ck-off chain,” he says of a big necklace. “It’s because it’s so expensive — it costs about $50,000 and it’s just a chain. When you’re wearing it, you know, it’s like, f-ck off.”

What’s most interesting about the piece isn’t its intrepid moniker, but that it’s made of 18-karat gold. After more than two decades making a name for himself with objets trouvés and trash-turned-treasure baubles — and winning countless accolades including a CFDA award last year — Binns is finally going for, as he puts it, “the real McCoy.” This spring he’s launching the Real Deal collection, his first foray into fine jewelry. Along with that aforementioned chain, offerings include clustered pearl earrings, 24-karat gold cuffs and 18-karat white gold rings with yellow diamond accents. The most splashy piece is a loopy, asymmetric necklace made of rubies, sapphires, amethysts and other gemstones. Maxfields, Harvey Nichols and Hong Kong’s On Pedder have picked up the line, which retails from $300 for 18-karat gold hoop earrings to $50,000 for larger necklaces.

“People were asking me about it, and I can afford doing real gold now,” explains Binns, who currently lives in Venice Beach, Calif. “I thought, why not?” But true to form, he is keeping to his subversive core rather than going the way of ritzy fine jewelry. This is, in the end, the same man who made pornographic brooches for Vivienne Westwood and poked fun at designers with pins that read “Comedy Garçons” and “Prima Donna Karan.”

In this new collection, Binns offers his own take on the classic single-strand pearl necklace, molding its inner wire so it bends at various points, creating an uneven, almost wavy shape. It’s dubbed, appropriately, The Drunken Pearls. “Pearls always lie so neatly,” he says. “What if they didn’t? I wanted to see how far you can stretch people’s ideas of what is precious. I’m always trying to change the perceived value of something.”

Just that mind-set has long underscored his designs. He’s turned everything from broken hammocks to old cutlery into jewelry. In the Eighties, he frequently used salvage from the beach, like sea glass and stones, as gems. He updated the latter idea for some of his Real Deal rings, this time casting solid 18-karat gold “pebbles” rather than using actual rocks. “Now that pebble is $2,000, or whatever,” he says with a laugh.

But fine jewelry isn’t the only news to come out of the house of Tom Binns. The designer is also adding a new series, Vandalized, to his couture collection. Imagine your best finery — on acid. He takes flamboyantly glamorous pieces and graffitis them with words like “Be Cruel,” “Destroy,” “Bollocks” and “Scum” in punkish Day-Glo fluorescents. Other works are paint-splattered à la Jackson Pollock. “It’s taking the rich and trashing it,” Binns remarks. There are also signs of anarchy topping regalia such as tiaras and earrings.

If this all sounds like an eclectic mix, it is. And that doesn’t even include the eight other groups under the Tom Binns label. Each has its own distinct character, ranging from the more Gothic Tough Chic (skull pendants galore) to Classic (sleek and minimal). Next October, the lineup will receive the high-art treatment when Phillips de Pury & Co. holds an exhibit and auction in London of Binns’ couture creations, including the new Vandalized lineup.

“It’s hard to brand me,” Binns says. “I have so many different personalities. I had this girlfriend who would say, ‘It’s like waking up with a different man each morning.'”