The designer decided Joan Smalls would be the face of the campaign during the label's fall runway show in Milan in February. 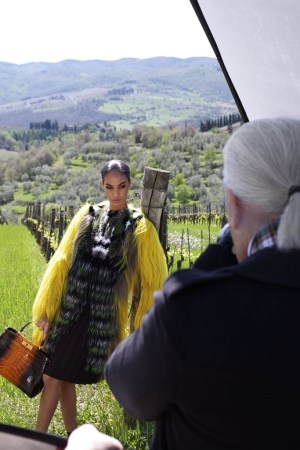 MADE IN THE SHADE: Just call him Mr. Decisive. While Fendi’s fall collection was parading the runway in Milan in February, Karl Lagerfeld made up his mind about the ad campaign when his eyes landed on model Joan Smalls wearing look No. 44: a yellow fur coat with an orchid-inspired motif. “I said to myself backstage during the show: It’s her and her alone. No other girl — or boy — no child, only her. She had this incredible golden, glowing skin that made her look like some Etruscan beauty,” Lagerfeld told WWD. “She is also a great girl to work with, and we had great fun.”

This story first appeared in the June 29, 2012 issue of WWD. Subscribe Today.

Intent on bolstering Fendi’s “strong Italian identity,” the designer chose as the shoot location a hilly site dotted with olive and cypress trees in Chianti, about 40 miles outside of Florence. “I wanted an Italian landscape — but not a summery one,” he explained. “We had bad weather, but it was exactly the mood and the colors I wanted.”

Lagerfeld and his crew, including Lady Amanda Harlech and the stylist Charlotte Stockdale, shot the campaign around a former vineyard. “We had to wait that the rain stopped but that was also what gave us the right light.” The campaign is slated to break July 15 in August magazines.

Lagerfeld had previously photographed Smalls, casting her for Chanel’s spring 2012 campaign opposite Saskia de Brauw (who, incidentally, is to appear in Chanel’s new cruise campaign).