“I just blurted out, ‘I think we should do Madonna,’” said Marc Jacobs. 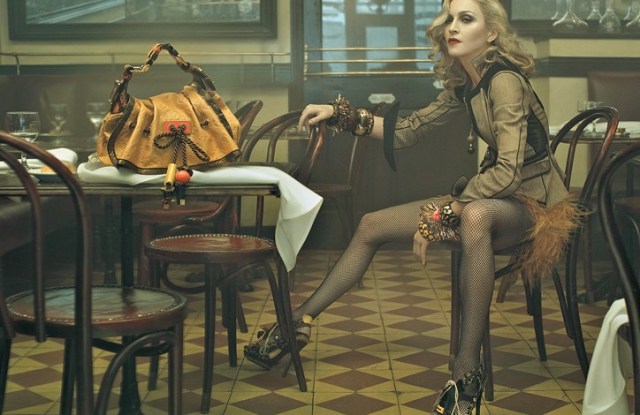 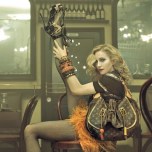 MADONNA AND MARC: When Marc Jacobs found himself in a meeting on a recent Monday morning to brainstorm about Louis Vuitton’s next fashion advertising campaign, inspiration struck. “I just blurted out, ‘I think we should do Madonna,’” said the designer, Vuitton’s creative director, mentioning he’d attended a concert by the pop icon the night before in Paris. “I was totally just blown away by it, and moved by her performance, by what she had to say, and her energy.”

As the meeting went on, Jacobs tapped out a message to Madonna on his BlackBerry, and within about five minutes came the reply: “I’d love to.”

This story first appeared in the December 4, 2008 issue of WWD. Subscribe Today.

The result is six atmospheric pictures of a smoldering Madonna by Steven Meisel that will break in a range of fashion magazines in February. “It’s a big change from what we were doing. It tells a story,” said Antoine Arnault, Vuitton’s director of communications. “This I think is an amazing coup, but more than that, there’s real logic behind it. It’s very linked to Marc’s fashion show.”

The campaign marks the end of Vuitton’s six-year collaboration with photographers Mert Alas and Marcus Piggott, with the parting characterized as amicable, and another reunion for long-time collaborators Madonna and Meisel. Jacobs last worked with Meisel in his Perry Ellis days. (Arnault noted it’s “very probable” Vuitton’s association with Meisel will continue.)

The campaign takes the very Parisian theme of Jacobs’ hit spring Vuitton collection, with a smoky French bistro the setting, and the sepia-toned images evoking a Brassai atmosphere. “As cliché as they are, I love all these French references,” the designer said. (Although the restaurant, Figaro, is on North Vermont Avenue in Los Angeles).

“I still feel it looks like beautiful, gorgeous Madonna,” Jacobs said about the images. “Excepting the references and excepting the clichés, this still feels very today. And it didn’t feel so much like a fashion shoot, it feels like portraits.”

The shoot wrapped up in less than a day and without incident, although Jacobs said hordes of paparazzi literally “appeared out of the bushes” the moment Madonna arrived. “It went from a quiet street to complete chaos,” he said.

The designer also marveled at the singer’s incredible fitness that allowed her to recline, her back arched, on bentwood chairs, or shoot a leg straight up in the air, no sweat. “She’s so sure of herself as an icon and as a woman. It was her idea to do the fishnets,” Jacobs said. “What fascinates me the most about her is her never-ending energy, and the idea of becoming and changing. She’s an artist who’s unafraid to use her voice.”

Arnault said the fashion campaign would appear “very strongly” in February and March issues and with few changes in media placements. “We’re staying on target,” he stressed.

The first visuals will spotlight slouchy bags in monogram canvas and monogram-embossed leather, along with ethnic-inspired sandals, bangles and sexy ready-to-wear. In tandem, Vuitton will continue to run its “core values” campaign, with spots featuring Sean Connery, the latest celebrity spokesman, continuing into next year. Analysts have estimated Vuitton spends more than $250 million annually on advertising, most of it print-driven.

MSLO EXIT: Martha Stewart Living Omnimedia is losing its chief financial officer, Howard Hochhauser, to a somewhat unusual post: he’ll be moving to Utah to serve in the same capacity at The Generations Network, a private company that operates a network of genealogy-focused Web sites. Hochhauser has been at MSLO for more than eight years and has been cfo since July 2006. MSLO’s controller, Allison Jacques, will take on his duties on a temporary basis while the company searches for a replacement.