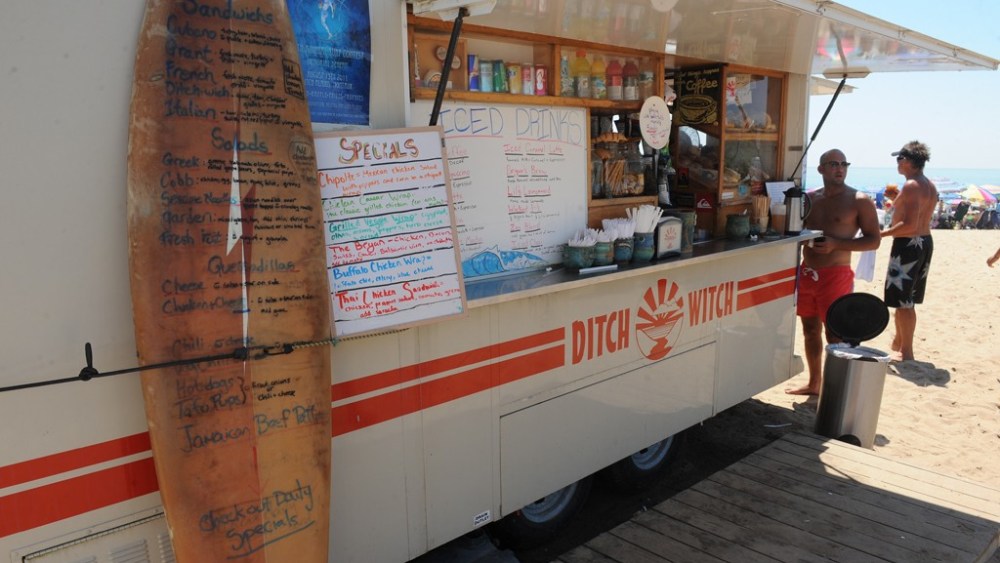 In “Summer Rental,” John Candy plays stressed-out dad Jack Chester in need of a vacation. On the brink of a nervous breakdown, he arrives from a long drive, family in tow, at a beautiful, secluded beach cottage with a palpable sense of relief and excitement. Since this is a Candy picture, his gorgeous rental turns out to be the wrong house, and he finds what he really got was an awesomely decrepit shack on a public beach. Turns out they have fun anyway.

That scene comes to mind when one first glimpses the East Deck, a beach motel in Montauk where Lucky’s Brandon Holley and Adam Rapoport, editor in chief of Bon Appétit, and their respective families spend their summer weekends.

“We pack up the car and a few steaks from the butcher, get some six-packs and bottles of rosé and grill in the backyard,” says Rapoport, who is partial to the food at John’s Drive-In. “It ain’t fancy. It’s more like indoor camping.”

“My favorite room is A9, right on the corner,” says Holley, who wakes up early for the Ditch Witch truck to get a hot sticky bun for her son and a homemade power bar for herself. In the afternoons, it’s the beach, a little putt-putt and sailing in a rented Hobie Cat with her son. Later on she’ll dig into smoked fish dip with crackers and drink dark and stormys, followed by a big bonfire and s’mores and maybe even the lighting of some illegal fireworks. “It’s basically summer camp every other weekend for my family,” Holley says.

Undeterred by the stop-and-go traffic on one-lane roads, mostly terrible restaurant food and crowded beaches, glossy magazine editors still favor making the trek to the East End for their summer weekends. And while Holley and Rapoport are partial to the old-school charm of the East Deck, it’s safe to say one won’t find fellow Condé Nasty Stefano Tonchi in line with them at the food truck.

The editor in chief of W lives in Bridgehampton, where he rides his blue Vespa to SoulCycle (also Allure’s Linda Wells’ preferred spot to pedal in place) or the South Fork Kitchen for organic produce and line-caught fish. “I spend a lot of time at home, by my pool reading,” says Tonchi. “I try to limit my trips outside of the house because of the traffic and crowds.”

Those reluctant gaps in his hermitage are often work-related, such as attending benefits or dinners. “But this year is very special because we have children,” Tonchi says, referring to his two newborn babies, Maura and Isabella. “I gravitate more toward Southampton than East [Hampton]. There is more of a multicultural flavor, and it’s more fun and very Euro. People aren’t in black but more colorful colors.”

Robbie Myers, editor in chief of Elle, on the other hand, is Team East Hampton. She spends the weekends in her “little house” in the tony town, making trips to Dylan’s Candy Bar on the main drag. She just got back from surf camp with her daughter, and so she’s most likely to be found at beaches from Ditch Plains to Atlantic Beach.

Neighbor Pilar Guzman, editor in chief of Martha Stewart Living, and her husband, Chris Mitchell, publisher of Condé Nast Traveler, said they lead “a very un-Hamptons-y life,” in East Hampton, adding she can be found most days at Sagg Main beach and evenings barbecuing with friends. They have a handful of restaurants they go back to, such as La Fondita in Amagansett and Bay Burger in Sag Harbor, but they don’t drive much. “We have been known to balance many a six-pack on the side of our bikes,” Guzman says.

Wells, meanwhile, retreats to Southampton, where she’s a regular at the farmers’ markets, fish shops and shops around town at Edit Summer for Derek Lam and Alexander Wang or Tenet, for Isabel Marant.

As the weekly party pages confirm, David Zinczenko spends many a weekend out in the Hamptons. Glenda Bailey, editor in chief of Harper’s Bazaar, says she’ll rent a beach house later this month in Amagansett.

The East End, however, isn’t for everyone.

“Can I hear it for New Jersey, the most maligned, misunderstood and underrated state in the Union?” says Jim Nelson, editor in chief of GQ. He spends most weekends at his house on the Delaware River in Jersey, in a town with no traffic lights. “It feels right and good to spend the whole summer blowing off the Hamptons,” says Nelson. But he will make an exception for the North Fork. “It feels lush and unspoiled, and at times you can almost fool yourself that you’re in California,” he points out.

During the months of July and August, WSJ. editor in chief Deborah Needleman becomes a commuter, taking the train to Grand Central from Garrison, N.Y. She reports that there is no nightlife and only one good restaurant, The Riverview in nearby Cold Spring.

Further up the Hudson, Glamour editor in chief Cindi Leive spends weekends at her home in Milan (the New York version, not the Italian one). It’s pronounced Mye-lan: “Say it the other way and you get eye-rolls from anyone local,” Leive says, adding that her goal is to do as little as humanly possible. When she does make it out of the driveway, Leive heads to Mercato Osteria, a neighborly restaurant in Red Hook, a nearby nursery, and on Sundays, it’s Pilates and the farmers’ market. “I once had a colleague who had a house near ours and she eventually moved away because, as she said, ‘there’s nothing to do there!’ But I think that’s why I like it,” Leive says.

Details editor in chief Dan Peres won’t have to worry about summer rentals this summer. His three-month-old twins will keep him anchored at home in Westchester for the foreseeable future. “If you can’t get there in a stroller, we’re not going,” he says.

Perhaps he should call Uncle Buck.