The Brave New World of Beauty

Even with audiences for magazine content still huge, the industry is having a hard time getting in on the massive growth of digital advertising.

Last year again saw a significant decline in ad revenue for magazine publishers in the U.S. Ad spending in print magazines, including Sundays or inserts, fell by 18 percent year-over-year, according to data compiled by eMarketer, to $8.97 billion in 2018 from $10.94 billion in the previous year. Spend in digital verticals of magazines actually rose by 3.3 percent, to $4.67 billion from $4.52 billion, but obviously not enough to make up the difference and not in line with the double-digit-percent growth in the digital ad market. Combined, advertisers spent 12 percent less with magazines and related content, down to $13.64 billion last year from $15.47 billion the year prior.

Go back a few years and the drop is even more precipitous. In 2008, ad spend in U.S. print magazines was $20.47 billion, according to eMarketer, plus $2.14 billion to digital verticals and sites, for a total of less than $23 billion. Print spend plunged the following year to around $15 billion — this was the Great Recession — and held around there until 2015. After that, it dropped by $1 billion, then $2 billion for three years straight. All told, print spend has fallen about 33 percent since 2015 and 56 percent since 2008. While digital has grown consistently since 2010 and has actually more than doubled in that time, it’s been incremental at best. By 2022, eMarketer projects that print and digital spend will be about equal, because print will have kept falling, to $5.2 billion, and digital will have only grown to $4.9 billion.

The annual report from MPA-The Association for Magazine Media on the general state of the magazine industry normally includes a breakdown of ad spend by the 50 largest advertisers — but did not do so this year. Last year the breakdown showed most major companies reducing their spend significantly. A spokeswoman for the group said the research came through a partnership that has ended. The report is sponsored by magazine printer Freeport Press. 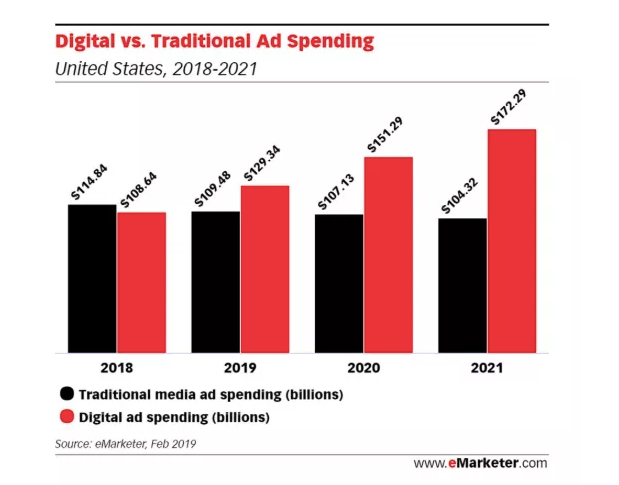 Even with continued declines in ad spend — the bulk of revenue for all publishers — the audience for magazine content is still large, although it, too, is shrinking. According to the MPA-AMM report, combined audience (print, digital platforms and video) for the 10 largest magazine brands last year came in at just under 540 million. That is a 7 percent drop from the year before, when total audience came in at 582 million. So it’s down, but still big. And several titles actually saw double-digital audience growth.

New York Magazine last year averaged monthly audience growth of 8 percent for its magazine and 26 percent on the web, according to MPA-AMM. Condé Nast title Architectural Digest grew an average of 29 percent on the web while Vogue’s audience for video grew an average of 95 percent, while video at Bon Appétit grew 107 percent. At Hearst Magazines, Town & Country averaged monthly web growth of 91 percent and mobile growth of 202 percent, while Harper’s Bazaar grew 18 percent on the web and 104 percent on mobile. In video, Cosmopolitan grew by 155 percent and Good Housekeeping grew by 208 percent, as video is still a relatively new area of focus for both brands.

Over at New York, the year’s most read stories were an excerpt from Michael Wolff’s “Fire & Fury,” a question-and-answer session with Quincy Jones and the feature story on “Soho grifter” Anna Delvey. Other stories that made it into the year’s top 10 by views were a Q&A between food writer Mark Bittman and Dr. David L. Katz about eating right and an episode ranking of “Black Mirror.” The publisher declined to share specific numbers on each story.

New editor in chief David Haskell noted that the biggest stories ran across New York’s verticals and coverage areas, but he admitted to a little surprised that the Bittman piece on eating right “found as wide a readership as it did, since there is a lot of diet and eating advice out there.”

The overarching reader trend at New York, however, was an appetite for “stylishly written long-form features.” Such an appreciation of narrative has so far continued this year, according to Haskell, as has “an appreciation for us taking big swings, being daring.”

At Conde Nast — now hyper-focused on video, even bringing in new chief executive officer Roger Lynch with a background in TV, while dramatically shrinking its print portfolio (down to nine from a peak of 32) — digital video is making strides. Bon Appétit with 4.1 million YouTube subscribers had 2.3 billion minutes watched in 2018 and has already hit that number this year. Its series “Gourmet Makes” produced nearly all of the magazine’s top 10 most-watched videos. Recipes are unsurprisingly Bon Appétit’s bread and butter, according to editor in chief Adam Rappaport, but that isn’t all there is to the video success.

“The challenge is riffing on a formula that works, while introducing a new wrinkle each time,” Rappaport said. “So, for instance, we’ll take our editors, who have become stars on YouTube, and highlight their favorite things on a page in the magazine, or invite them onto the podcast, or feature their what-I-had-for-dinner photos on our Instagram feed. On each platform, the treatment is slightly different, but the personality remains the same.”

Vogue has 5.8 million subscribers on YouTube, but its most watched videos over the last year have been entirely celebrity-driven. Its most viewed video was a “73 Questions” with Kim Kardashian West, which featured her husband Kanye West and her children. It pulled in 34.5 million views alone. Kardashian West getting fitted for the Met Gala (which Condé sponsors and Anna Wintour dictates) was also the subject of Vogue’s second most-watched video with 21.7 million views. Her sister Kylie Jenner also accounted for two of the year’s most-watched videos. One on her Met Gala look got 13.1 million views and another on her “beauty secrets” got 25.5 million views.

Anna-Lisa Yabsley, Vogue’s digital director, said Vogue content gets an average of 75 million views a month on YouTube and adds an average of 250,000 subscribers a month. Yabsley said the growth is the result of listening to the magazine’s online audience, essentially giving them more of what they engage with. So the Kardashians surely aren’t going anywhere. But she also pushed the magazine’s access.

“The breadth of talent we feature continues to fuel [our video series’] and audience appetites show no signs of waning,” Yabsley said.

But it’s Architectural Digest that had more significant growth in video and with its web content overall. Its YouTube subscribers have more than doubled since last year to 1.84 million, with the success of “Open Door,” which tours celebrity homes, but also the launch of “On the Market,” which features high-end non-celebrity real estate for sale. A few of the most successful videos last year were a tour of Jessica Alba’s home (13.7 million views); a tour of a Bel Air mansion with a car elevator (10.1 million views); a tour of YouTube star David Dobrik’s home (8.9 million views), and a look at Kris Jenner’s home (5 million views).

With non-video content, design-focused pieces have done well and average time spent on-site is up 21 percent year-over-year. AD’s Instagram following has also grown 50 percent year-over-year to 4.4 million followers. Editor in chief Amy Astley pointed to web stories like “City Parks of the Future” and several focused on architecture as the most successful of the year, along with a few listicles and “how to’s” featured on AD’s new sister site Clever. She did not provide specific traffic numbers.

“Our round-ups do exceptionally well and are aimed to appeal to both design novices and enthusiasts alike,” Astley said. “In the case of the Clever articles, a lot of this is oriented toward a more utility-driven editorial that help our readers consider more aspects of their loving space.”

As for video, the strategy is pretty simple. “People love home tours that are grand and wildly expensive,” Astley said.

The focus on digital is purportedly paying off for Condé. A company spokesman insisted that the publisher is bucking the larger industry trend of losses in print revenue far outstripping gains in digital, claiming that digital and video ad revenue are actually making up the difference of continued losses in print. However, he declined to provide specifics.

Meanwhile at Hearst Magazines, the publisher ended up with the most titles seeing top 10 growth, according to MPA-AMM. Again, Town & Country grew its web audience 91 percent and its mobile audience 202 percent, with the most read stories being those on “The Crown,” late Sen. John McCain, the Royal Wedding and Queen Elizabeth.

“We’ve had similar successes in 2019 with both the death of Gloria Vanderbilt and the arrest of Jeffrey Epstein,” Angell said. “There is also a whole different group of people who come to T&C for advice on what to buy, where to travel and what to drink…and we have used data to inform on our huge growth in lifestyle content.

Harper’s Bazaar also had growth on the web and on mobile, with its total brand audience increasing by 53 percent, according to MPA-AMM. And similar to T&C, royals coverage helped a lot. Joyann King, executive editor of the web site, said the “majority” of Bazaar’s stories that got more than 500,000 views had to do with the British royals, including coverage of the royal wedding, which drove 7.25 million views last year. The site’s top story was on the reveal of the new royal family portraits, which garnered 2.8 million views alone.

“Our reader is just as interested in what boots to buy for fall as they are about whether or not their right for an abortion is going to be stripped away,” King said.

Even with successes of some magazines with new content and strategies, the market is still difficult given the rapid decline of its place in the ad market. It’s been usurped and then some by Google and Facebook, which get almost all of their revenue from advertising, last year ate up 60 percent of the entire digital ad market, equal to about $65 billion in revenue. 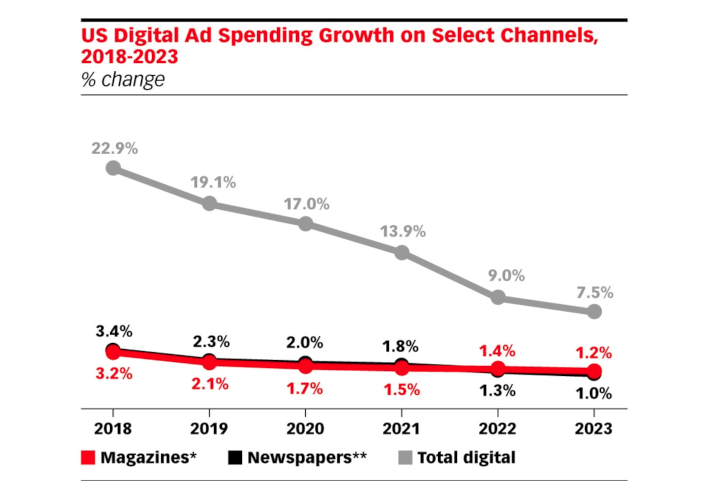 Even with continued growth in digital advertising — it overtook print and television last year and eMarketer projects it to grow another 20 percent this year, hitting $129.34 billion in the U.S. — magazines are having trouble getting a piece of it. EMarketer projects digital ad revenue will only grow 2.1 percent for magazines this year. Meanwhile, print ad revenue this year is projected to drop another 17 percent.