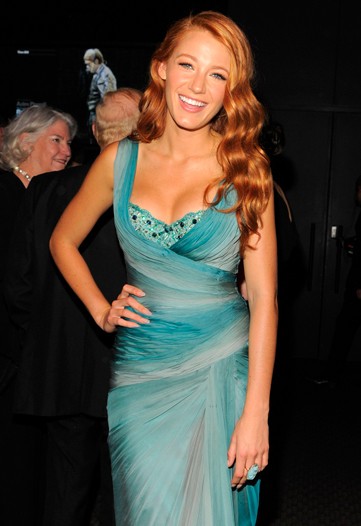 MAKING TIME: The Time 100 Gala had no shortage of politicos and celebrities walking the red carpet Monday evening, with Sting, Martha Stewart, New Jersey Gov. Chris Christie and Mark Wahlberg all making a pit stop in front of a throng of screaming photographers. But it was Blake Lively who had reporters practically falling over themselves, all to get a glimpse at her new ‘do. “Wait, does she have red hair now? Did she dye her hair?”

Yes, the “Gossip Girl” star colored her hair a month ago, for a new role in “Hick,” a Derick Martini directed film about a Nebraska teen that sets out for Las Vegas. Wearing a flowing sea green Zuhair Murad gown, Lively told WWD she’ll be wearing Chanel on Monday night, when she goes to the Met Ball. And who will be her date? “Karl Lagerfeld, of course!”

Meghan McCain, a panelist for Time’s Person of the Year, brought along her hairdresser as her date. “I’m also going to an NRA convention and the White House Correspondents Dinner this weekend, so he made me even blonder. And this dress is Alexander McQueen. Everyone was like, ‘Why did you wear it?’ and I said, ‘Because it fit!’” Tanned first girlfriend Sandra Lee, in Alberta Ferretti, said she’s choosing between Dior and Oscar de la Renta for the Met Ball. She also admitted she’ll be in front of the TV bright and early Friday morning to catch the royal wedding. “Out of respect for Diana I’ll end up watching it,” she said. “You know, it’s a nice thing. Everyone watched Diana and now, her son is getting married.”

In between shots with the various guests arriving on the red carpet, Richard Stengel, managing editor of Time, said he was most looking forward to meeting Patti Smith. Last year, Smith won the National Book Award for her memoir and more recently, she was shot by Annie Leibovitz for a Disney ad campaign with Johnny Depp, in the spirit of “Pirates of the Caribbean.” “Her music is a symbol of artistic rebellion and she’s iconic,” Stengel said.

Many of the celebs on hand also admitted to wanting to meet the poet-rocker. “That’s sort of amazing,” Smith said, in her trademark Ann Demeulemeester and YSL pants. “I can’t believe that. I’m just, I don’t know, I’m just usually at home working, being with my son and daughter. “But yes, I did that shoot with Johnny. I love all of his movies.”

DARK ANGEL: Piaget has signed Jessica Alba as the ambassador of its Possession jewelry line. Images of the “Sin City” star, shot by Patrick Demarchelier, were unveiled on the brand’s Web site and Facebook page on Wednesday. Posing in outfits ranging from a casual jeans-and-blazer combo to a smart black cocktail dress, the actress shows no hint of her current baby bump. The six shots, styled by Brad Goreski, include five color images and a black-and-white portrait of Alba wearing a diamond-studded cuff, earrings and ring.