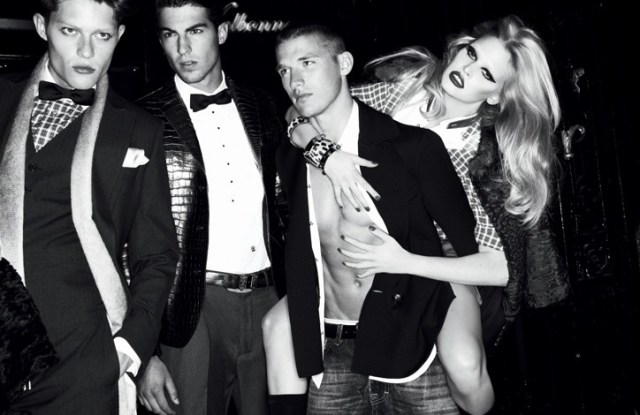 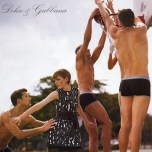 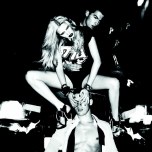 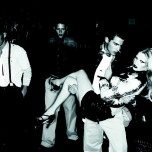 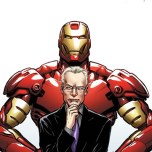 MALE CALL: David Gandy’s sculpted torso has joined Scarlett Johansson’s voluptuous flesh in Dolce & Gabbana’s beauty ads. Four athletic men in their skivvies are shooting hoops around model Stella Tennant in Saks Fifth Avenue’s fall campaign. And the muscular limbs of Andrés Velencoso are peeking out from behind Christy Turlington’s black leather wardrobe in Yves Saint Laurent’s spots. Is it too soon to declare the return of the “himbo”?

This story first appeared in the August 28, 2009 issue of WWD. Subscribe Today.

“I think after the ugly skinny boys of Hedi [Slimane’s] days…some ‘beauty’ was needed, but new beauty,” mused Karl Lagerfeld, whose favorite male model, Baptiste Giabiconi, plays a supporting role in many of the campaigns and editorial features Lagerfeld lensed this season. These include an eye-popping call-boy-themed couture shoot in the September issue of Numero and appearances in Chanel’s cruise and handbag ads for fall. (Giabiconi also recently won a big contract to model for the Schwarzkopf brand Taft.) As for why more men are suddenly turning up in women’s fashion ads and editorials: “It’s very simple,” Lagerfeld explained. “They put the girls in a more lifestyle situation. Lonely girls can be a little sad in a fashion story. They dress not only for other girls, but also to please men. The popularity is sudden because there are a few new faces.”

Handsome faces and fit physiques are also on display in current ads by Calvin Klein, Dsquared and Vivienne Westwood, among others. Lagerfeld likens Giabiconi, now rated number one on Models.com, to “a boy version of Gisele [Bündchen]: skinny, skinny but with an athletic body — good for clothes and great with no clothes.”

According to Lagerfeld, Giabiconi evokes envy even in other models. He recounted that when Naomi Campbell met him in Moscow recently, she told him, “It’s not right: We all have defects. You have none.”

Meanwhile, Italy’s Dsquared noted that coed ads, while sexy, also have an economic plus. “To be perfectly honest, the presence of both men and a woman in the same ad shoot was a way to cut costs and get more value for your money,” said designer Dean Caten, who, with his brother, Dan, conceived a party-girl-on-the-town theme for the fall ads with guys — washboard abs occasionally exposed — as props. “Depending on the predominance of the girl or the boys, the image can go in men’s or women’s magazines.”

FORTUNES OF FASHION: Fortune this week will publish its annual Business of Style package, which includes profiles of François Henri-Pinault, head of luxury goods conglomerate PPR, and online retailer, Net-a-porter. Fortune’s Peter Gumbel reports that Pinault spotted the economic downturn in early 2008, well before the recession hit the luxury market, and reacted by making key decisions, including reducing inventories and curbing spending. Such moves helped PPR report better-than-expected earnings for the first half of 2009. Pinault’s father, François Pinault, lauded his son’s leadership skills, telling Fortune: “He has a lot of sangfroid. I’m impressed — but don’t tell him that. We’re not a family that gives compliments easily.”

COMIC MAN: The Tim Gunn franchise is about to get more ubiquitous: Marvel Comics is set to release Loaded Gunn, an eight-page comic in which Gunn dons Iron Man’s suit to save the day at the “New York Museum of Fashion.” The story appears in conjunction with the Models Inc. series, which in turn has been revived from Seventies-era characters created to bring in more female readers.

The series’ editor, Charlie Beckerman, said Loaded Gunn was inspired by the democratization of fashion in shows like “Project Runway.” “It seemed like a good opportunity to tap into that excitement,” he said.

Writer Marc Sumerak worked with Gunn to brainstorm plotlines, as well as to attribute to Gunn both signature catchphrases and lines adapted to the Marvel Comics universe. Example: “You know, there are far easier ways to accessorize than grand larceny.”

As it turns out, the Marvel Comics staff is replete with “Project Runway” fans — Gunn later visited the office for a tour, and one employee cried when he complimented her outfit.

VICTORIA ON FILM: Bergdorf Goodman gets into the movie business on Sunday — at least on the Internet. The retailer will bow a digital short film on its Web site for Victoria Beckham’s fall collection of dresses. The digital short, “Swings,” features eight models filmed on a London street in a single take, perching on rope swings placed on everyday objects, from a bus stop to a building portico, and swinging in unison. Beckham herself then swings into the frame in one of her dresses. The short was directed by Matt Jerrett and produced by 19 Entertainment, which backs Beckham’s collection. It’s the second short film she has done to promote her line. The first was shot at an English countryside estate for the spring 2009 collection. And the latest short has another motive — it will help promote Beckham’s appearance at Bergdorf’s on Fashion’s Night Out on Sept. 10.