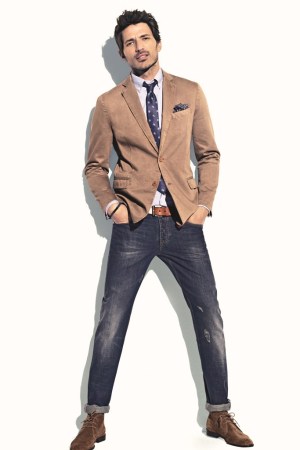 MANGO MAN: Wearing a dark blue double-breasted jacket, white T-shirt and dark jeans, Andrés Velencoso looked the part — nice and normal in updated classics, a lot like H.E., the Mango menswear brand he fronts for the spring campaign. At a press conference held in Madrid, the 34-year-old Spanish model and budding actor was asked how he liked being the best-looking man in Spain. “I didn’t know I was,” he replied sans attitude. As for his personal dress code, “It’s comfortable and casual.”

And regarding girlfriend Kylie Minogue, he noted, “We’ve been together four years, she’s very nice to be around.”

Launched in 2008, H.E. by Mango operates 96 stores in 27 countries. Thirty new locations are scheduled to open this year.