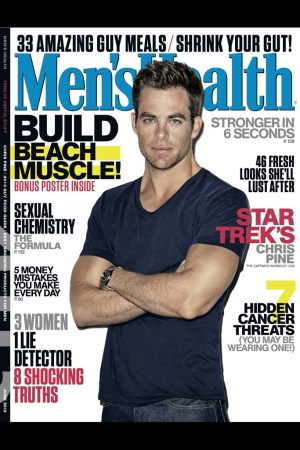 MANPOWER: On Wednesday evening, Rodale’s Men’s Health magazine threw a party for its annual grooming awards. It was a long way from Maria Rodale’s Farm Country Kitchen in Emmaus, Pa. The magazine took over the Top of the Standard at the Standard High Line. Champagne flowed freely, and waiters passed around the kind of unwholesome apps, like mini grilled-cheeses, that aren’t normally part of six-pack diets.

The glitz factor was as if Dave Zinczenko had never left.

This story first appeared in the May 20, 2013 issue of WWD. Subscribe Today.

The evening’s panache may not have been in keeping with Rodale’s heartland values, but the magazine is in the middle of promoting a new redesign, and more importantly, underscoring its relevance post-Dave.

Copies of the June issue, which features a pensive Chris Pine, the actor, on the cover and a softened logo, were scattered about everywhere.

Plus, the grooming awards are really to impress and thank the beauty and grooming industry, which according to publisher Ronan Gardiner now makes up the majority of the advertisers in the men’s fitness and health title.

Zinczenko brought his swagger over to Men’s Fitness, where he is consulting editorial director, and has completed his own redesign to make David Pecker’s magazine “cooler,” as he told WWD recently. And on Tuesday, he threw his own party for the June issue, which features actor Vin Diesel on a cover that recalls his old Men’s Health, also at the Standard, East Village location.

The hotel’s rooftop was teeming with advertisers and many Zinczenko look-alikes also in open-necked shirts and dark suits. Men’s Health had beauty insiders like Carol Russo, senior vice president and general manager, North America, for Aramis, while Thomas Roberts, the fill-in host on MSNBC’s “First Look,” dropped by Men’s Fitness.

Zinczenko was acrimoniously kicked out of Rodale last November over differences with chief executive officer Maria Rodale. And there were, and probably still are, concerns that Men’s Health could not survive without the editor who made it a household name. By Wednesday there was a better indicator than party food of the state of the horse race between the two titles. The silver lining for both Pecker and Rodale is that both magazines are up double digits in advertising pages through June, according to Media Industry Newsletter. But Men’s Fitness had 416 pages to 406 in Men’s Health. At the same time the year before, the score was reversed, with Health beating Fitness by nearly 20 pages. Point, Zinczenko.