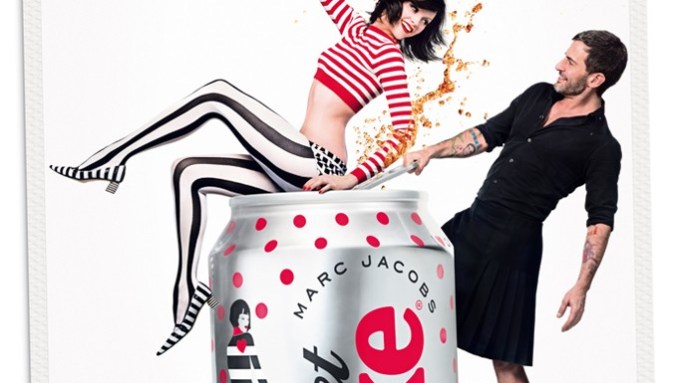 Marc Jacobs dons his signature kilt and puts his toned muscles to work in a new advertising campaign for Diet Coke that breaks this week in various European markets. Print placements in the U.K. include Glamour, Company, Elle, Marie Claire, InStyle, Cosmopolitan and Stylist magazines.

As part of his role as creative director for the soda giant in 2013, Jacobs can be seen hoisting — Atlas style — a giant pop can, atop which sits Latvian model Ginta Lapina in a Nineties fashion look. Another cheeky ad image shows Jacobs wielding a giant opener, dislodging Lapina from her perch on the bottle cap.

Photographed by Stéphane Sednaoui, the ads are part of the “Sparkling Together for 30 Years” campaign marking the brand’s anniversary in Europe and its latest collaboration with a leading fashion designer. They were unveiled at an event in London on Monday along with the three bottles Jacobs designed, each corresponding to a recent decade in fashion.

The drinks, including a limited-edition boxed set of all three bottles, are on sale this month in 11 European markets including the U.K., France, Benelux and Iceland.

Karl Lagerfeld and Jean Paul Gaultier have also been creative directors for Diet Coke, which has since been consumed by more than 2.7 billion people in Europe.