There may not be a chartered flight this year, but businesswomen attendees and sponsors are as interested as ever, according to editor in chief Sally Holmes.

Around this time of the year, close to 100 businesswomen — a mix of founders, executives and influential types — usually descend on Newark Airport in New Jersey to board a chartered United Airlines flight to San Francisco on which they’re treated to massages, facials, reiki treatments and much swag. The women have no idea what exactly they’re in for on arrival on the West Coast, where they meet other attendees, but it normally involves a combination of mingling with surprise celebrity guests such as actresses Regina King, Ellen Pompeo and Daisy Ridley; business panels and a lot of networking.

Welcome to Power Trip — Marie Claire’s annual 36-hour, invite-only, all-expenses-paid networking conference for successful women across all industries that former editor in chief Anne Fulenwider launched in 2016 as a way to make the magazine stand out in the event space amidst the plethora of media conferences that already existed. Her idea was that Power Trip removes all the typical event stressors like planning and networking and travel as Marie Clare takes care of everything — even sending attendees a suitcase full of clothes and shoes from sponsors that they might like to wear.

This year’s gathering will look very different though as, like much of 2020, Power Trip is turning virtual amid the pandemic with the inaugural Power On event taking place Thursday. Instead of meeting at the airport, this year’s group of women will log in from their homes and it will be just one day instead of 36 hours.

But while some of the luxe elements such as the flight will be missing, Sally Holmes, Marie Claire’s brand new editor in chief (Fulenwider’s successor Aya Kanai departed for Pinterest in September after just nine months) insists that there won’t be a dip in the number of women attending. In fact, she’s expecting around 300 to log on versus about 200 in previous years as they’re also opening it up to past power trippers since they don’t have to fly them anywhere. Usually attendees are mostly newbies, many of whom feature on Marie Claire’s annual list of the “New Guard” for women in business, the publication of which has been pushed back due to COVID-19.

She’s also making sure that the perks and elements of surprise still feature heavily. “We’re still doing giveaways, we still have celebrities that are under wraps, we also have an amazing business panel,” she said, not wanting to reveal the celebrities ahead of time, only teasing that Gabrielle Union, October’s digital cover star, “may or may not” make an appearance. The panel of business speakers has been revealed, though, and includes Rent the Runway chief executive officer Jennifer Hyman, WNBA commissioner Cathy Engelbert and interim head of Tiktok Vanessa Pappas.

“It’s such a mix of business entertainment, politics, a little bit of everything. Basically what we do on the site or the magazine. It’s like an amalgamation of that in real life,” Holmes, previously executive editor of Marie Claire, added. 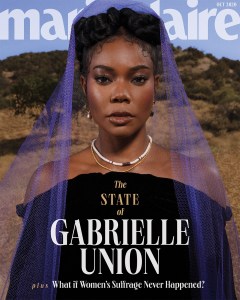 Despite COVID-19 hitting a number of businesses across the board hard, Power On also has an equal roster of sponsors to previous years’ Power Trips, but not all the same. Since they’re not boarding a plane this year, United, their main sponsor from the beginning, is sponsoring them through its Explorer Card. Dell, which has also been a partner for the past four events, is returning again. Other Power On sponsors include Simon G, Dermstore, Sarah Flint, White House Black Market and Soma.

Lori Fromm, head of sales at Marie Claire, said: “Although the pandemic has presented challenges, with that has come great opportunity—opening doors for new and diversified category partners looking for ways to connect with women in an authentic way, including Presenting Partner United Explorer Card.”

As for why sponsors like this event so much despite it being fairly small scale, Fromm believes that a “quality over quantity approach is of interest to partners as they form meaningful connections with existing and new customers via the power of a once-in-a-lifetime experience.”

And deals have been done via connections made on the trip, according to Marie Claire. You might never think that a luggage company and a bakery would be a match — but Away and the Flour Shop collaborated on a limited-edition luggage collection inspired by founder Amirah Kassem’s rainbow sprinkle cakes. Dell and Intel and sustainable home cleaning products maker Blueland have formed an ongoing relationship stemming from their shared innovation-driven and environmentally responsible initiatives. The company founders and leaders all met on the Marie Claire Power Trip.

“It’s marrying two different businesses who might not normally get to interact,” added Holmes.

This year, networking will take place in breakout rooms and only time will tell if that’s as effective when it comes to potential dealmaking as on the plane.

With Many In-person Events Not Returning Until at Least 2021, Virtual Offerings Remain Key for Media Companies

Making a September Issue During a Pandemic