Executive editor Sally Holmes will take over the helm at the magazine.

That didn’t last long. After just nine months as editor in chief of Marie Claire, Aya Kanai is moving on to the tech world, taking on the newly created role of head of content and editorial partnerships at Pinterest.

Her decision to leave Marie Claire, a joint venture between Hearst Magazines and Marie Claire Album, is understood to have come completely out of the blue for Hearst executives since she only took the reins from Anne Fulenwider in January and was continuing to make her mark on the publication. Nevertheless, they moved quickly and have named Sally Holmes as her successor at the women’s fashion title. This is in stark contrast to when they took six months to find Glenda Bailey’s successor at Harper’s Bazaar.

At Pinterest, Kanai will mainly be working on the company’s editorial efforts, including shoppable curations and new content for the platform from publishers, creators and influencers. The company has been making a big push into these categories lately, including the May launch of Shopping Spotlights, which allows users to purchase curations by guest editors such as influencers and publishers. Former Teen Vogue editor in chief Elaine Welteroth, influencer Blair Eadie and interior designer Sarah Sherman Samuel and publications such as Refinery29, Domino and Who What Wear were involved in the launch.

“I am looking forward to evolving the creative ways we can inspire Pinners, while giving brands new ways to reach this growing audience,” Kanai said in a statement. “I have spent my career celebrating the vast diversity of personal style, bringing stories to life through images, video and features. It is more important than ever that a range of voices and styles are discoverable and representative of all.”

As for Holmes, she is no stranger to Hearst, having joined the publisher in 2014 as the senior news editor at Elle.com, before taking on the role of deputy editor in 2016 and then executive editor in 2017. She has been with Marie Claire since 2018, first as digital director, overseeing all content for the brand’s web site and social platforms and then as executive editor, helping reintegrate print and digital teams, which had been previously split up by ousted president Troy Young. 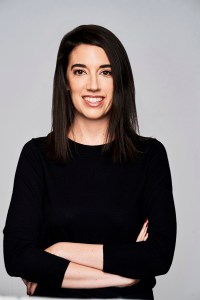 Her digital chops will no doubt come in handy as Hearst has quietly reduced the title’s print frequency from 11 issues last year to just seven in 2020 amid the pandemic and instead launched its first digital issue with cover face Janet Mock. In August, MarieClaire.com had 11.7 million visits, compared to 37.9 million at Elle.com and 16.2 million at Bazaar.com, SimilarWeb’s data showed. According to Marie Claire’s sales pitch to advertisers, it has a total print circulation of 959,158.

Holmes will also be responsible for Marie Claire’s first digital iteration of Power trip — its invite-only networking conference for women entrepreneurs that was due to take place in San Francisco in November, but has been postponed until spring 2021. It will go virtual for the first time with Power On, which will be launched in conjunction with its second digital cover.

Kate Lewis, Hearst’s chief content officer, said: “Sally is always challenging herself and the team to produce beautiful fashion features, ambitious investigative stories and insightful, sharp news about culture. Her approach has reaped rewards, with massive audience growth and engagement. I can’t wait to see what she will bring to the brand in this important role.”

Holmes added: “At this critical moment in our country, I’m honored to lead a brand that has the power to inspire meaningful change, amplify voices and galvanize readers to vote.”

Making a September Issue During a Pandemic

With Many In-person Events Not Returning Until at Least 2021, Virtual Offerings Remain Key for Media Companies