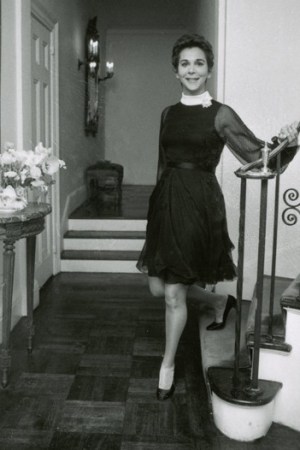 Evins was a socialite and a member of the Best-Dressed List Hall of Fame who collected Impressionist paintings and fine jewelry and organized many events for charity before going to work as an adviser to Allan Johnson, chairman and chief executive officer of Saks Fifth Avenue, then as p.r. director for the department store Bonwit Teller.

“She was a woman of great style and great insight who took no prisoners,” said her son Matthew, who is chairman and ceo of the company she later founded, Evins Communications. “She actually rolled [those qualities] into a business.”

Evins grew up in Lancaster, Pa., and spent two years at the University of Pennsylvania, before moving with her mother to New York when she was 20. Her first husband was Stanley Ballin, a member of the philanthropic Klingenstein family, and she married David Evins in 1955.

David Evins made shoes for First Ladies from Mamie Eisenhower to Nancy Reagan, and movie stars including Judy Garland, Marilyn Monroe and Ava Gardner, and he designed the shoes Grace Kelly wore to marry Prince Rainier.

“She had the best taste,” her longtime friend journalist Elsa Klensch said of Marilyn. “She always knew how your hair would look better. She was the sort of person who would buy white peaches and send them to you as a treat in the summer. She was a joy.”

Realtor Louise Sunshine introduced Evins to Donald Trump, and Evins helped Trump negotiate with Genesco, which then owned Bonwit Teller and David Evins’ company, to sell the air rights of the store so that he could create Trump Tower. Later, she was instrumental in helping Michael Gross launch his career — she and Harriet Weintraub, who became partners in a p.r. company after she left Bonwit, introduced him to their client, Diane von Furstenberg. His story about DVF ended up on the cover of Manhattan Inc., and the magazine made him a contributing editor. “She was close enough to the people in the worlds that we covered to be helpful, but she kept enough sense of herself not to identify with them or obstruct the writer,” said Gross. “She had a delicious, gleeful sense of gossip. Having a friend like her was just invaluable for a young journalist in a world that I learned about by covering.”

Marilyn and David Evins frequently visited the White House during the Reagan years, and Marilyn counted Nancy Reagan and Betsy Bloomingdale among her closest friends at the time. John Loring devoted many pages to her style of entertaining in his books “Tiffany Style” and “Tiffany Parties.”  When Valentino first came to the U.S., she transformed the Pierre Hotel into scenes from “The Arabian Nights” for a fete. Her son Matthew, in turn, handled Valentino’s 30th anniversary party. Matthew and his wife Louise Evins bought Evins Communications from his mother in the early Nineties, at which point she retired from business and returned to working for charity.

Marilyn Evins is survived by her son, her grandson Alex and a niece and nephew, Reed Evins and Melissa Evins, both of who design shoes. There will be no services; Evins will be cremated and her ashes scattered on her favorite beach in Florida, as she wished.